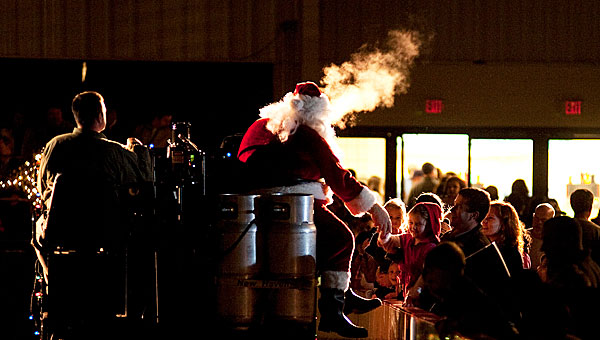 When the Zamboni appeared from behind the bleachers during Pelham’s annual Christmas tree lighting, the sound of shrieking children in the Pelham Civic Complex’s main ice arena was deafening.

The city had just lit its enormous 25-foot Christmas tree, and the kids were anxiously awaiting one of Pelham’s most unique traditions.

When the Zamboni came into view, children rushed to the edge of the ice to greet Santa Claus as he rode around the rink on the giant ice machine.

“I love it. I absolutely love it,” said Pelham Fire Department Capt. Brian Cleveland, Shelby County’s only Zamboni-mounted Santa. “I don’t know how we came up with the idea of riding out on a Zamboni.”

During Cleveland’s ride around the ice, he uses the arena’s PA system to greet children in the crowd and boom hearty laughs through the facility.

Because Cleveland, a Pelham High School alumni, has been living and worshiping in the city for many years, he often knows the children in the crowd by name.

“Some of the kids I see there year after year,” Cleveland said. “It’s a lot of fun, because I will try to call the kids by name when I know them.

“You can see their eyes get really big because Santa Claus knows their name,” he added.

After the Zamboni finishes its laps and is again parked in its bay, Cleveland then rushes to the Civic Complex’s banquet room side to individually meet with the dozens of kids waiting to tell Santa their Christmas wishes.

But even before the Pelham Civic Complex existed, Cleveland was filling the same holiday role. In the pre-Zamboni days, Pelham hosted its tree lighting ceremony outside in front of Pelham City Hall on U.S. 31.

“I would dress up as Santa and ride a fire truck around to the front of the (City Hall),” Cleveland said. “Then we would do a meet-and-greet with the kids. It was kind of the same thing we do today, just without the Zamboni.”

Cleveland began portraying Kris Kringle shortly after the city started hosting its tree-lighting ceremony and sending a fire truck-mounted Santa around to neighborhoods on Christmas Eve.

“Around ’79 or ’80, the fire department started riding Santa around on the fire truck on Christmas Eve. Another Pelham resident did it for years, but when he retired I stepped in. I guess I was the right size for the job,” Cleveland said with a laugh.

“And I’ve done it ever since,” he added.

Today, Cleveland rarely rides on top of the fire truck dressed in red and white garb on Christmas Eve, preferring the heated confines of the truck’s cab.

“As firefighters, our shifts are 24 hours on and 48 hours off. So it’s usually a different shift working Christmas Eve every year,” Cleveland said, noting the department usually sends out five fire trucks to tour the city on Christmas Eve.

“It gets pretty cold riding on top of the truck. Santa is usually up there for six or seven hours,” Cleveland added. “I did it for a few years, but now I think it’s more fun to drive or ride in the cab.”

From left, Melanie, Brittney, Reed and Richard Henderson recently appeared on the CBS show "Home for the Holidays," where they... read more