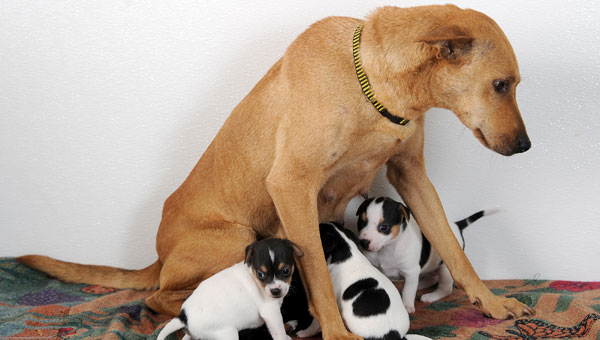 Ellie, known as “Angel” by the Shelby Humane Society staff, nurses puppies that were delivered to the organization without their mother. (Contributed)

By JENNIFER FREEMAN / Special to the Reporter

There’s an angel in the bathroom at the Shelby Humane Society.

At intake the underweight, frightened terrier mix was named “Ellie.” The only things more pronounced than her protruding ribs were her engorged mammary glands that beckoned for the puppies that weren’t delivered to the shelter with her.

Arriving just 24 hours after the arrival of four, unweaned puppies without a mother to nurse them, all five made it to the office bathroom where the puppies’ tummies were filled via the generosity of a surrogate mother who was promptly declared to be an angel. And so it is, Ellie became “Angel.”

Frequently, an inner office bathroom at the Shelby Humane Society is converted into a temporary nursing room for vulnerable puppies and the mothers nursing them — be it their own mother or not. These fragile beings are protected and nurtured as best as any shelter permits.

Many shelters make it policy not to employ such measures and opt for the less expensive alternative of euthanasia. For Shelby Humane Society staff, euthanasia is no alternative to the promise of life found in a one-way ticket north.

Thanksgiving Day marked the five-year anniversary of Shelby Humane Society’s first transfer of homeless, helpless canines to shelters in New England, where they are quickly adopted into forever homes.

Almost 5,000 wet noses have since found new homes in the Northeast.

Prior to that time, there were few angels in the bathroom. Sure, we found them all angels, but there were far too many of them, too few of us, and only one bathroom. But with regular transfers of deserving four-legged friends from our shelter, space is made available for those awaiting their ticket home. With what seems to be a never-ending supply of canines in need, every imaginable space is used to accommodate them.

With predictable regularity, the bathroom is forfeited once more to the needy. The moms and pups that previously occupied this room have now found their way into the homes and hearts of new families. For now, Angel and her neonates make use of this room as they wait for their call to board a vehicle that will take them home.

Like the countless angels that came before her, Angel patiently waits for the promise of “home” to be realized. To Shelby Humane Society staff, she is not just a chore requiring daily attention, but a pair of big brown eyes eager to see the world in a different light. She is more than a surrogate mother to the four puppies she is nursing; she is the matron that epitomizes the hope of all who care for her.

She is a saint who fell victim to those who couldn’t appreciate her value. The motherless pups she is nursing and nurturing have discovered her to be an angel.

She is our angel in the bathroom, a temporary companion who makes all labor-intensive efforts worth the investment. Staff members embrace the hope found in the Shelter Partners program and the space it makes available for angels, present and future.

Whether she finds her home in the South or the North, it makes no difference … as long as it is found. And sweet irony is enjoyed in realizing that although she may find heaven in any home, we know it is “Angel” who will make any home a heaven.

If you would like more information on Ellie, or any other deserving pet at the Shelby County Humane Society, please visit ShelbyHumane.org, or call 669-3916, ext. 21.