A Christmas surprise for a returning soldier

WILSONVILLE — “What do you get a guy who just spent a year in Afghanistan?”

That was the question Wilsonville resident Shawn Lipscomb faced when she found out her son, Pete Cole, was likely to return to the U.S. after a year’s deployment to Afghanistan with the 1165th Military Police Company with the Alabama National Guard. He and his roommate, Elliot Lawrence, who was also a member of the 1165th MP, were expected to arrive shortly before Christmas, although the exact date was uncertain.

Lipscomb had some experience with returning soldiers. Her father had been deployed to Desert Storm, while her husband, Cole’s stepfather, had spent time in the Middle East in 2005.

“I know kind of where they’re at,” she said. “All they want is home at that point.”

So, Lipscomb decided to prepare Cole’s home, which is also in Wilsonville, for his return. She told him she was just going to straighten up and clean.

Instead, she and her mother decorated his home for Christmas. The centerpiece was a Christmas tree decorated with ornaments from Cole’s friends and family. 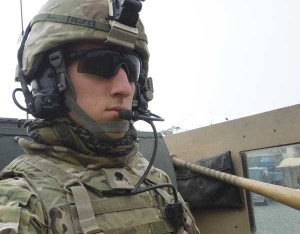 Pete Cole was expected to return to the U.S. before Christmas.

Lipscomb sent out requests for the ornaments in early December, when she learned there was a chance her son could be home in time for the holiday. She asked them to send ornaments, along with a note from the sender. She kept the notes and well wishes for her son to read after seeing the tree.

“I’ve got ornaments coming every day,” she said in mid-December. “It turned out to be a big deal. That’s what he needs is a big deal.”