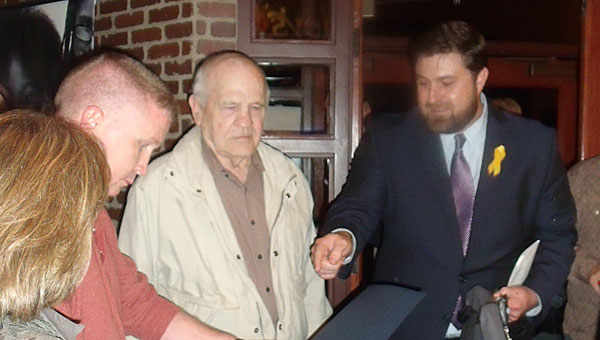 When Hoover police officer and National Guard Sgt. 1st Class Smiddie Avery arrived at Alabaster’s O’Charley’s restaurant on Dec. 26, he thought he was just going to have a quiet dinner with family and friends.

But when he entered the restaurant, he was surprised to find several military veterans, local residents and officials with the Blue Star Salute of Alabama lined up to welcome him not only to O’Charley’s, but to America.

“The fact that he was having dinner with his family was not a surprise,” said O’Charley’s Southeast Marketing Manager Rickey Bryant. “All of the people lined up to welcome him was definitely a surprise.”

Avery, who serves in the 20th Special Forces Group, recently returned home from his third deployment to Afghanistan, and was selected to receive a hero’s welcome through O’Charley’s Homecoming Celebration program.

Through the program, which is a partnership between the restaurant and the National Guard, O’Charley’s asks National Guard officials to nominate soldiers who have recently returned home from deployment.

After selecting a soldier, the restaurant then plans a homecoming celebration and allows the soldier’s family to invite up to 11 guests to enjoy a complimentary meal.

When Avery walked into O’Charley’s, many of the patrons dining at the restaurant also gathered to welcome him home. Avery also received gifts from O’Charley’s and a thank-you card signed by members of the community.

“I was amazed by how much support we got from the community,” Bryant said of the event, noting many soldiers from Avery’s unit were also on hand. “We had the VFW, Blue Star Salute, a retired colonel singing the National Anthem, a color guard, it was amazing.”

Bryant said Avery was speechless when he walked into the restaurant.

“He was really blown away,” Bryant said. “He was humble about everything and he said he was very appreciative. That’s just the kind of person he is.”