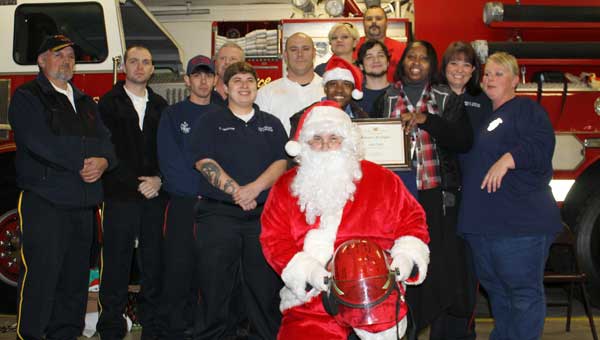 Whenever the firefighters of the West Shelby Volunteer Fire Department stop by the Calera Waffle House for a bite to eat, they spend time chatting with Justin Taylor before getting back to work.

Justin and his mother, Renee Taylor, live in Childersburg, and the pair drives to Calera three nights a week for Renee to work at the restaurant, according to West Shelby’s Phil White, treasurer of the board of trustees.

Justin, who is 18 years old, is a young man with special-needs, White said. Renee, a single mother, took the job at the Waffle House because it was a place where she could bring her son while she works.

Nathan Robertson, a lieutenant with West Shelby, said Justin “just goes crazy” when the firefighters walk into the Waffle House in their fire clothes.

This Christmas, the West Shelby firefighters decided to do something special for Justin and his mom.

“Every year, as the fire department we adopt a family. This year, our funds were kind of slim, I guess you could say,” White said. “I had talked to him (Justin) several times because he always talks. His momma said he loves firefighters.

“I told my wife, what we need to do is we need to make his Christmas,” he added. “Let’s get him over to the fire department and let him get on a fire truck and let’s take him for a ride.”

On Dec. 23, Justin became an honorary firefighter. Starting at fire station two off Alabama 119, Justin rode over to station one on Shelby County 22 in a fire truck with lights flashing the whole way.

Santa was waiting when he arrived. The firefighters presented Justin with a personalized firefighter’s dress shirt and an autographed fire helmet.

The firefighters also collected about $300 to give to Renee, who rode on the truck with her son.

“This is just something we felt like we needed to do,” Robertson said. “Times are hard right now. A lady, a single parent, is going above and beyond. It ain’t much, but we’re going to try to help her out during these times.”

White said he just wants to see the “beautiful smile” on Justin’s face as he rides on the truck.

“We’re just trying to make the kid have a wonderful Christmas,” White said. “We can’t do much, but we’re going to do what we can do. If you ever get a chance to meet the kid, he’ll touch your heart. The things he says, he’ll have you laughing. He hust reaches out and touches you. That’s what he’s done with me.”