Athletic trainers aren’t just people on the sidelines waiting to spring into action should a player get injured. For five years, Shannon Ashe has not only been on the sidelines at Calera High School athletic events, but also supervised players, helping them train and rehabilitate from injuries.

Ashe, a certified athletic trainer, recruiting coordinator and Champion Sports Medicine employee, is a native of California. She did undergraduate studies at the University of Arizona, graduating with a bachelors in physiology and athletic trainer certification. She completed her masters of education at Northwestern State University of Louisiana in sports administration and was a graduate assistant athletic trainer. 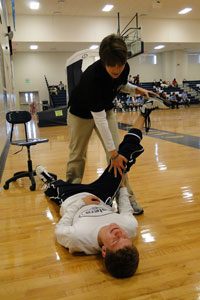 Ashe’s love for sports developed in high school. “I was a student athletic trainer as a way to get some background in the medical field,” she said. “I originally considered pediatrics, but changed my mind and went to college to receive athletic trainer certification.”

Athletic trainers are specially trained to safely and efficiently get an injured athlete assessed, rehabilitated and back in the game. Without them, coaches run the risk of allowing the athlete to return too soon or not playing an athlete who is ready.

Ashe said kids who truly get out and play get some aches and pains, especially the first couple of weeks of training. “The difference between hurt and injured is if they can’t do an activity with the involved body part due to pain or instability. If it’s just sore we work through that, otherwise we get it looked at.”

Ashe and husband Chris have three children, 4-year-old Cole and 1-year-old twins Kaylee and Lida. These days, she enjoys a variety of sports. “I watch college football on tv and attend pro baseball games,” she said. “Though I played soccer in my youth, now I’m more likely to be found on a tennis court or running after my three little ones.”

Her advice for a healthy new year is: Take the stairs and park farther away from entrances. Eat dried fruit instead of chips, grilled meat instead of breaded, or a little juice or lemon water instead of soda. Eat several small meals instead of one or two big ones, adding fiber will make you feel fuller so you don’t eat as much.

Involving family and friends who desire to stay healthy will help you want to stay healthy. Obviously the reverse is true, so change their outlook to help change yours.

The truth of the temple

A priest at the temple leads the congregation in worship during a Dec. 18 service. (Reporter Photo/Jon Goering) Pelham serves... read more