The truth of the temple 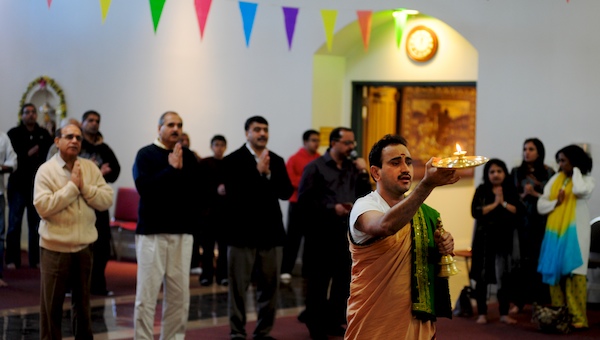 A priest at the temple leads the congregation in worship during a Dec. 18 service. (Reporter Photo/Jon Goering)

Passing by the colorful chalk sketches on the concrete and through the glass doors of the Hindu Temple and Cultural Center of Birmingham on a recent Sunday morning revealed a polished marble floor, the sweet aroma of incense and the quiet echo of chants resonating from the temple room.

Following the sound of the unified voices and rhythmic bell rings led to a square, vaulted-ceiling room filled with nearly every color imaginable and a gathering of about 25 worshipers chanting in unison while facing a statue depicting the deity Lord Rama and his family.

“Every month, we pray to a different deity,” temple member Indra Soni whispered as he sat in one of the few chairs lining the back of the room. “Today, we are praying to Lord Rama.”

Behind the deity, one of 13 represented in the temple, hung strands of multi-colored and white lights emulating the appearance of the night sky. 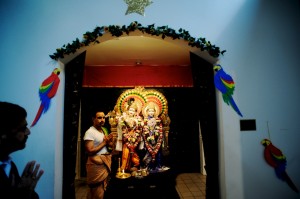 A priest prepares one of the deities in the temple for worship before a service on Dec. 18. (Reporter Photo/Jon Goering)

Strands of colorful flags curved from each corner of the ceiling and met in the middle of the room a few feet above the worshipers’ heads. The banners, which had been hanging in the temple since mid-October, were placed during the temple’s new year celebration.

“These were placed for the end of the year,” Soni said, noting the temple celebrated Diwali, or the festival of lights marking the Hindu new year, on Oct. 26, 2011.

As the morning wore on, more and more worshipers gathered in the temple to take part in the service. After the worshipers concluded their unified prayers, many spread out to pay their respects to the individual deities around the temple.

Each deity depicted in the temple represents a different area of life, Soni said. 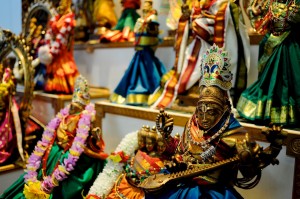 “There is only one God. We only worship one God,” Soni said. “But at different times, he may appear in different forms.

“The statues in our temple are an assembly of one God,” Soni added. “It’s like the assembly in Congress or in Montgomery. There are many individuals and personalities who make up one body.”

Soni said the statues of the deities are similar to symbols in other religions, such as Christianity. 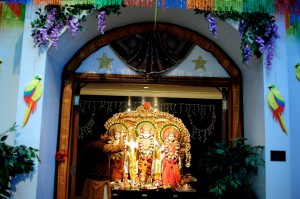 A priest prepares one of the deities in the temple for worship before a service on Dec. 18. (Reporter Photo/Jon Goering)

Soni also said Hindu differs from many other religions because of its beliefs about life.

The ultimate goal of a member of the Hindu faith is to achieve Moksha, which is the soul’s liberation from “the cycle of death and reincarnation and all of the suffering and limitation of worldly existence,” said Vishwa Rao, the temple’s vice-chairman.

“One must achieve Moksha on his or her own under the guidance of a Guru. A Guru or a Siddha inspires, but does not intervene,” Rao said. “It is important for a person to follow their true nature and seek to do their duty in life.

After the worshipers prayed in the temple room, the building quickly filled with laughter and the chatter of friends sharing stories from the previous week. After exiting the temple room, the group formed a line heading toward the building’s Cultural Center side, where several temple members brought a pot-luck lunch consisting of many authentic Indian dishes.

At the lunch table, the conversation quickly turned to the previous day’s University of Alabama’s football game against LSU, and how the two teams would fare in the BCS standings as a result.

The worshipers at the temple were a small percentage of the roughly 1,000 Hindu families Soni said were spread out across the Birmingham metro area.

Despite the sizeable Indian population in central Alabama, the Hindu community did not have a central place to observe its religion until about 14 years ago. 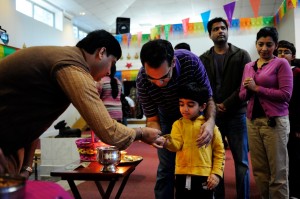 “There were three or four families who came together to help build the temple in Pelham,” said temple member Meena Shah. “In the beginning, we struggled to find financial support and the land we needed.

“We started asking for donations, and we had wonderful support from our people,” Shah added. “It is because of God’s grace that we are here today.”

Before Hindu temples were built in Pelham and Roebuck, members of the Hindu community gathered and worshiped in each others’ homes, Rao said.

“Most Indian homes have a prayer room or altar. A lamp is lit and the Lord worshiped each day,” Rao said.

After finding the vacant 5-care lot near the back entrance to Pelham’s Chandalar subdivision in 1995, and in February 1997, temple supporters secured a $1 million loan to construct the building. Since then, the temple has added another wing dedicated to educational programs.

“The temple is very essential in our culture. You want to be able to gather and celebrate your culture and pass it onto your kids,” Shah said. “But anybody can come here and worship God. It is not just for one group of people.”

For Bro. Mike Shaw, president of the Alabama Baptist Convention and pastor of the First Baptist Church of Pelham, the Hindu temple and other religious offerings in the Birmingham area represent one of the country’s greatest assets.

“I don’t share their beliefs, but one of the things that America was founded on was freedom of religion. I think that’s important,” Shaw said of the Hindu temple.

“We have a lot of people who have come here from different lands,” Shaw said. “We practice religious freedom in our country. People are free to believe, or not believe, what they want.”

Rao said he acknowledged the predominance of Christianity in the South, and said he uses the opportunity to learn about a different culture.

“It is mostly Christianity here. I love that. I want to learn from them,” Rao said. “Hinduism accepts that there are many ways to worship God, and it does not subscribe to any one dogma.

“We do not say ‘Our way is right, and everyone else is wrong,” he added. “We want to compliment. Not create problems.”

From Staff Reports Wilsonville – Fourmile Fire and Rescue in Wilsonville has been awarded a $223,250 federal fire grant to... read more