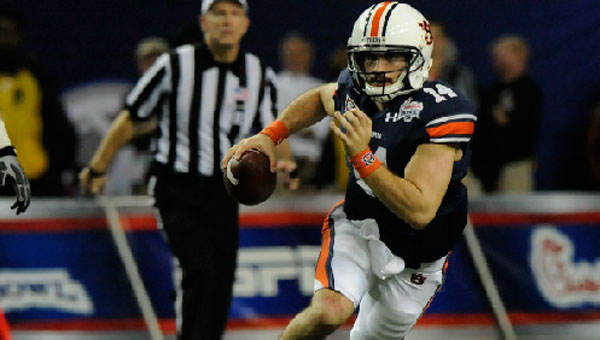 ATLANTA — Barrett Trotter energized the Tiger Walk crowd during the Chick-Fil-A Bowl Fan Fest hours before kickoff Dec. 31 in the World Congress Center next door to the Georgia Dome.

Trotter led the pack of Auburn players through a path of orange and blue on their way to a New Year’s Eve bowl game against the Virginia Cavaliers.

The former Briarwood Christian School quarterback energized his teammates and coaches in the Tigers’ 43-24 win over the Cavaliers after being called into action following an injury to starter Clint Moseley.

Trotter capped his junior season by passing for 175 yards and a touchdown, while also rushing for 32 yards on five carries, as he picked up where he left off after being benched in favor of Moseley midway through the season.

“It means a whole lot to finish out with these guys,” said Trotter, who completed 11-of-18 passes in the victory. “It was good to be able to finish what I started.”

Trotter waved his arms in the air emphatically late in the game and sprinted to midfield with the game ball to celebrate with his teammates after taking a knee on the final snap.

Auburn coach Gene Chizik said it was a fitting end to the Tigers’ season.

“I couldn’t be more proud of a young guy than I am of Barrett Trotter in so many ways off the field, the way that he handled everything in the middle of the season and what a fitting end to his season,” Chizik said. “He finished it the way he started it.”

Trotter completed a 50-yard pass to wide receiver Emory Blake midway through the second quarter to set up a 1-yard touchdown run by Kiehl Frazier, which gave the Tigers a lead they wouldn’t relinquish.

Trotter’s pass deep down field to Blake, which was right on target, was easily the best throw he made during his junior season.

“They were playing a tight corners look, and I feel really comfortable with that play,” Trotter said.

Trotter threw his lone touchdown pass in the game to Ontario McCaleb, a 29-yard scoring toss, with just under one minute remaining in the first half to give the Tigers a 28-14 lead.

Auburn set a bowl record with 28 points in the first half. The Tigers’ 43 points were a season-high and eclipsed the school record for points scored in a bowl game.

Holland caught the ball in mid air following a forced fumble by teammate Ryan Smith near midfield in the final minutes to allow the Tigers to melt the clock on their final drive.

Holland, who played with a cast on his arm, finished with two tackles in the victory.