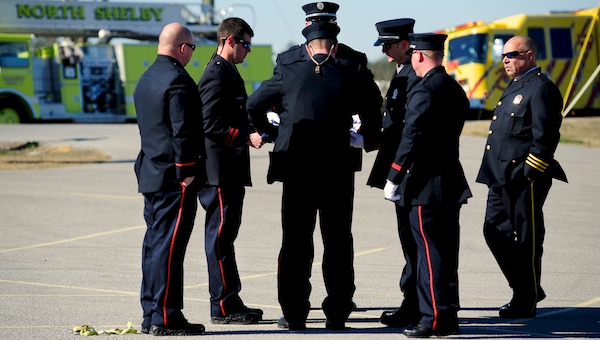 Following the last radio dispatch call in honor of North Shelby Fire Chief Michael O'Connor at Charter Funeral Home in Alabaster, members of the Alabaster Fire and Rescue Service fold the flag that flew over the procession on Jan. 3. (Reporter Photo/Jon Goering)

NORTH SHELBY – North Shelby Fire Chief Michael O’Connor passed away on the morning of Jan. 3 after suffering from a sudden illness.

O’Connor, 56, was employed by the fire department since 1982, rising through the ranks to become fire chief in 1995, according to North Shelby Battalion Chief Mark Turner.

“Saturday evening (Dec. 31), he suffered severe headaches, and when a friend took him to Brookwood Hospital, he went into unconsciousness. It was determined he had a brain hemorrhage or stroke,” Turner said. “He was on life support until this morning (Jan. 3). There was nothing the doctors could do. It was sudden and totally unexpected.

“He was the picture of health. He’s a triathlete. He goes all over the country and competes and does well in his age category in triathlons,” Turner said.

Indian Springs Mayor Steve Zerkis said O’Connor took a “very good fire department” and made it a “heck of a lot better.”

“He was proud of the fact that virtually every employee in (the department) was cross-trained as a firefighter and EMT or other type of medical service person,” Zerkis said.

“He also was a lead voice for the fire chiefs of the state in lobbying the legislature for improved fire safety laws, building codes and so forth. He was an active voice there. He would forever tell me about having to go to Montgomery to push for this and that,” Zerkis added. “He was very much of an activist when it came to fire safety and things of that sort. And that’s going to be a loss.”

Turner said O’Connor “always strove” to promote safety and health for firefighters, not only in North Shelby, but across the state.

According to Turner, the North Shelby fire district will hold a memorial service at a later date. The exact location for that service has not been decided. For updated information on services for O’Connor, visit Shelbycountyreporter.com. O’Connor was survived by his wife, Nelle, and two brothers.