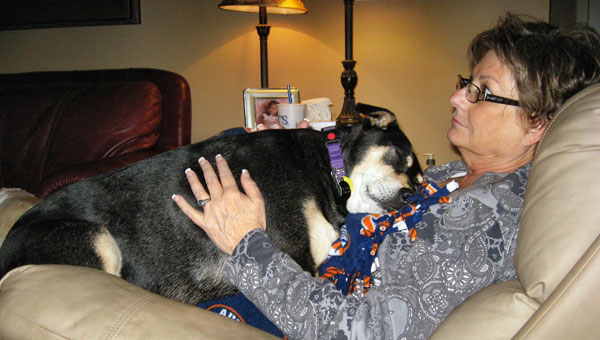 According to Carla Smith, Dolly Dog has become a "60-pound lap dog" in the Smiths' household. (Contributed)

CALERA – After being on her own for at least three years, Dolly Dog finally has a place to rest her wandering feet.

Buddy and Carla Smith invited Dolly Dog, a tan, mixed-breed female, into their home after feeding her while she was loose in the Calera area.

“She had all kinds of worms, including heartworms, so we weren’t real sure how she was going to do,” said Carla Smith of Dolly’s original condition. “She’s completed her heartworm treatment. She should be completely heartworm free. She was 34 pounds when we got here, and probably more like 60 now.”

According to Smith, Dolly is “obsessed” with cats.

“She must have undoubtedly befriended cats in the wild,” Smith said. “She sees to it that the cats are OK and taken care of. When she finds out they’re all OK, she’s like, ‘OK, my job is done.’”

Dolly claimed a place in the Smiths’ living room as her own.

“She got a big, old red leather chair she’s decided is hers. Ninety nine percent of the time you’ll find her there, if she’s not in our lap,” Smith said. “A 60-pound lapdog is a bit of a stretch.”

Smith said that after two to three years on the run, Dolly is still wary of strangers, but warmed up to the Smiths.

“Because she had been out on her own so long, I thought she’d never be a house dog,” Smith said. “She’s as good a house dog as any I’ve ever seen.

“She’s ours, we’re hers and this is her home,” she added.