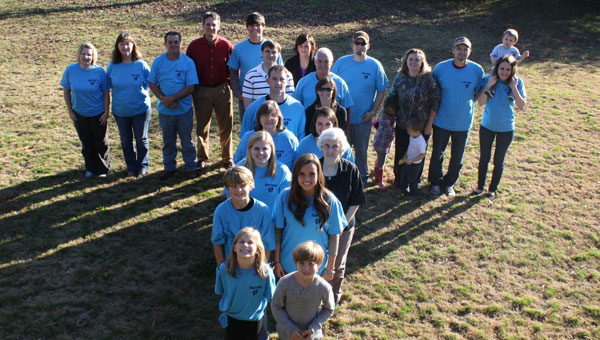 Trent Grubbs' friends and family members display their "Team Trent" T-shirts, which they will wear during a Jan. 7 prayer walk at Veterans Park in Alabaster. (Contributed)

About a week after her nephew, Trent Grubbs, was seriously injured in a wreck in Chilton County, Helena resident April Riley began thinking of ways she could help Grubbs while also helping her community.

Grubbs, a 16-year-old Rockford resident and junior at Isabella High School, was airlifted to UAB Hospital on Oct. 28, 2011, after his truck left the road and flipped several times. On Jan. 6, Grubbs will have been in the hospital for 10 weeks recovering from a spinal cord injury to his C7 vertebra, Riley said.

“We were originally afraid that his spinal cord had been severed, but the doctors said that he has an incomplete spinal cord injury,” Riley said. “We think that through the grace of God, he will be able to walk again.”

Over the past few weeks, Riley and her family have worked to organize “Team Trent” in Grubbs’ honor. The family has already made Team Trent shirts featuring the phrase “Until he can walk, we will walk for him,” and is planning to wear them during the Mercedes Marathon in Birmingham in February.

On Saturday, Jan. 7, the family will host a 5K prayer walk at Alabaster’s Veterans Park at 9 a.m.

“We feel like he will be able to walk again, but we don’t know if it will be in five minutes, five hours or five years,” Riley said. “We wanted to have the prayer walk to give everyone a time to pray and get fit at the same time. We wanted to do something that would benefit everyone.”

The family will be selling a limited number of Team Trent shirts for $8 each at the event, which will cover the price of the shirts, Riley said.

“This has been a big ordeal, and we are trying to do everything we can to help him,” Riley said. “He is 16 years old, and he is a really good boy. He’s always done well in school, and he never gets in trouble.”