Chelsea pharmacist living out his dream 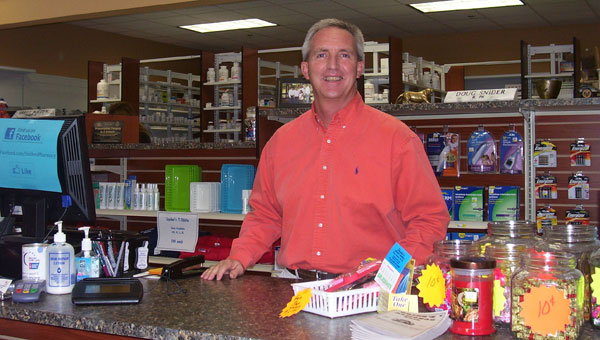 Doug Snider at his new pharmacy in the Baptist Health Center in Chelsea, where he serves his God and his community. (Contributed)

Doug Snider always wanted his own pharmacy in the town where he lived and went to church and where his kids went to school.

This dream was realized when he opened a pharmacy in Chelsea.

Snider, his wife Cathy and their three children moved from Hoover to Chelsea in 2000. He had worked at his uncle’s pharmacy in Sumiton for 20 years, but in 2006 he finally opened his own.

“The opportunity just fell into place,” he said. “It was a God thing.”

He said he walked into Robbie Hayes’ place (Hayes Eye Center) one day and asked him if he had an opening. Hayes said he had one space available and another tenant was moving out, which would leave the room Snider needed.

With help from friends and family, he renovated the space and opened his first pharmacy in December 2006. As the business grew, he began to dream about a bigger place. And in 2011, when he was offered a spot at the new Baptist Health Center in Chelsea, this dream came true: he owns a pharmacy in the town where he lives and goes to church, his sons Justin and Will graduated from Chelsea High and his daughter Kelley is in seventh grade at Chelsea Middle School.

“Through much prayer and hard work, God has allowed us to help many people throughout Shelby County,” he said. “Not only by helping our customers, but by giving to our churches, schools and youth sport leagues.”

God has also blessed him with the opportunity to hire hard working Christian employees with good work ethic, who discuss their faith openly and proudly at Snider’s Pharmacy, he said.

Snider said he accepted Christ as his Savior in 1972, and his relationship with God continued to grow with his cancer diagnosis in October 1991. “I had 10 pound malignant tumor removed and did not require chemo or radiation. I knew God had his hand on me and had more for me to do in my life. (He) opened many doors and opportunities along the way to get me where I am today.”

He said that he begins each day with Bible reading and prayer at the breakfast table with his wife and daughter, then trusts God to lead him to serve his community, his customers and employees, with God’s will at heart.

Doug Snider can be reached at Snider’s Discount Pharmacy, 678-3899 or snidersdiscount@bellsouth.net.