Panthers return with another title 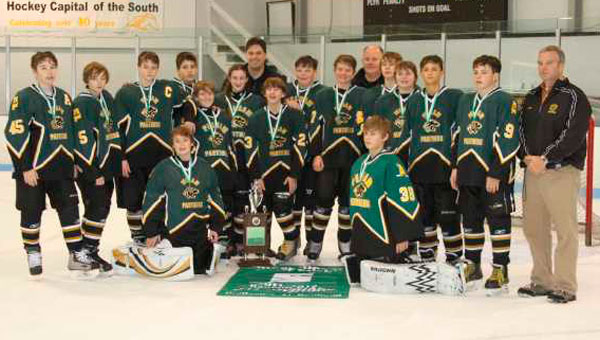 The Pelham community in Ontario, Canada had no idea about Pelham, Alabama three years ago.

After two straight trips to the International Silver Sticks Association hockey tournament by a youth hockey team from Shelby County’s Pelham ended with a championship in Canada’s Pelham, locals have learned a lot about the Southern community with the same name, said Pelham Panthers bantam team coach Tony Harlow.

The Pelham Panthers have even developed a local fan base in Ontario following their second International Silver Sticks Association championship Jan. 8, Harlow said.

The Panthers, who returned with many of the same players that played on the pee wee team that won a championship a year ago, claimed the title following a 3-1 victory over the Caledonia Thunder of Ontario in the bantam division’s championship game.

Matthew Darnell, Blake Harlow and Jakob Hornsby scored one goal each to lead the Panthers in the title game.

Goalkeeper Zachary Rodgers made 19 saves in the victory.

The Panthers, who dropped games against the Oakville Rangers (Ontario) and Westchester Vipers (Penn.) while tying the Mt. Clemens Predators (Mich.) in pool matches, dominated during the tournament portion of the event.

Pelham defeated the Chicago Cyclones (Ill.) 3-1 and Columbus Blue Jackets (Ohio) 6-0 on its way to the tournament championship.

The Panthers, who are currently in the middle of their Southern Youth Travel Hockey League schedule, own a 16-10-6 record.

Rodgers has made a team-leading 294 saves for the Panthers.

Harlow said the tournament was an eye-opening experience for three newcomers to the International Silver Sticks Association tournament. Slawinksi, Weber and Klewsaat each made their first trip to the tournament this past weekend.

“It’s quite an experience,” Harlow said. “It’s a huge deal for us.”