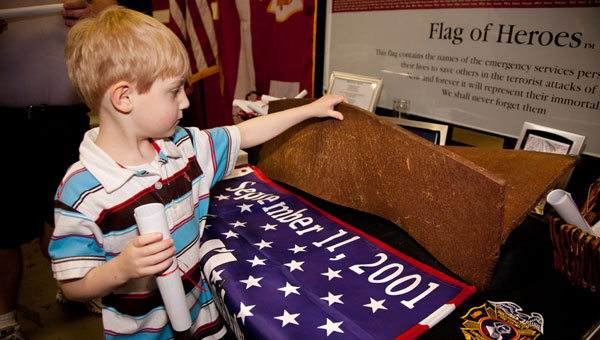 The piece of steel from the World Trade Center is housed at the Dry Valley Volunteer Fire Department off Shelby County 19 in Montevallo. (Contributed)

MONTEVALLO – When a fire engine approached the Dry Valley Fire Department on Jan. 8, it carried more than new equipment for the department. The recently donated truck carried a piece of American history.

The piece of steel was donated by the Terry Farrell Fund to the Alabama Fire College in Tuscaloosa, as the fire college is the state memorial for fallen firefighters.

Terry Farrell was a firefighter who passed away on Sept. 11, 2001. His brother, Brian Farrell, established the memorial fund in honor of his brother to help New York firefighters. The fund grew to include assistance with scholarships and equipment for other firefighters, said Fire Chief Spruce McRee of Brierfield Volunteer Fire and Rescue. 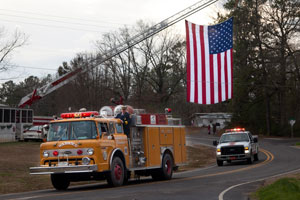 The fire engine was donated to Dry Valley Volunteer Fire Department from the Washington Fire Company in Pennsylvania. (Contributed)

The Pelham Fire Department Honor Guard escorted the steel from the engine to the display area in the DVFD station, according to McRee.

FDNY Firefighter Richie Schmidt of Rescue 4, who helped remove the body of Terry Ferrell from the rubble of Sept. 11, will present the steel to the fire college in June. Schmidt made crosses from the steel for the family members of the fallen firefighters. The steel currently at DVFD was what remains of the steel Schmidt used.

Until the presentation in June, the steel will be housed at different fire departments in the area.

“It’s going to be put on display at any fire department that wants to host this piece of steel so people can come touch it,” McRee said. “Richie (Schmidt) wants it displayed so people can touch it and be a part of it so we don’t become desensitized to the events of that day.”