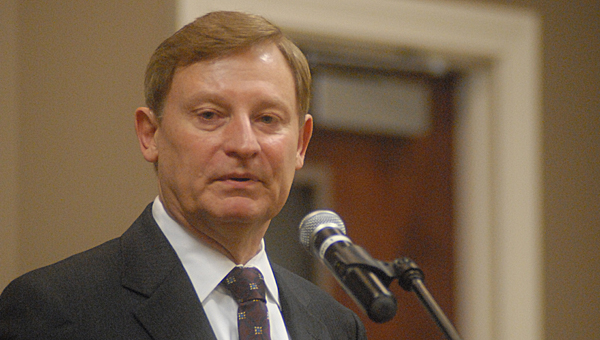 U.S. Rep. Spencer Bachus, R-Ala., said he was in favor of giving local governments more power and criticized the Environmental Protection Agency’s regulation of the nation’s cement and concrete plants during a Jan. 11 breakfast in Pelham.

During the breakfast, which was sponsored by the Greater Shelby Chamber of Commerce and held at the Pelham Civic Complex, Bachus said he would like to see federal tax dollars given directly to local governments to spend as they need.

“I believe in local government. (Alabaster) Mayor (David) Frings or (Pelham) Mayor (Don ) Murphy should be deciding how to spend money in Pelham or Alabaster,” Bachus said. “Now, your money goes to Washington and you have to lobby to get it back. It goes up there and all kinds of strings are put on it.”

Bachus said giving more control to local governments would “create a better tomorrow” for the nation’s next generations.

“Our children are not going to have as much opportunity as we have if we don’t change things,” Bachus said. “How do we create a better tomorrow? Hand power back to the people.”

“The EPA is driving cities and counties nuts. Cement plants have been told to reduce their output of mercury and arsenic,” Bachus said.

Bachus said the new regulations will allow American cement and concrete companies to output “one-third” of the emissions similar plants in Europe are allowed.

He said the highest concentration of arsenic and mercury is along the United States’ west coast and along its border with Mexico, and said the toxins are carried there “by the jetstream” from China and Mexico.

“We will never be a good example for China. They will clean up when they have to,” Bachus said.

Bachus also said he would like to see the Keystone XL pipeline completed, which would connect oil refineries in Texas to oil sands in Canada. Currently, the pipeline stretches from Hardisty, Alberta, Canada to Cushing, Okla.

“For three years, they (Canada) have been pleading with us to extend that pipeline, and environmentalists are holding it up,” Bachus said. “We forced the president, we gave him 60 days to say it’s in our national interest not to proceed with the pipeline. There is no way he can say that.

“If he does, it will cost tens of thousands of jobs, it will give cheap oil to China and it will cause our dependency on the Middle East to continue,” Bachus added, noting he “100 percent will not support President (Barack) Obama” during the 2012 election.

Mary Jo Morrison at Team Fever in Pelham helps a line of customers gathered in the store the day after... read more