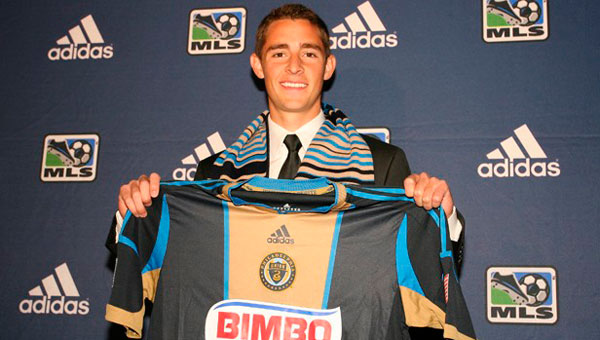 Hoffman was selected by the Philadelphia Union with the 13th pick in the 2012 Major League Soccer Draft, which was televised live nationally Jan. 12 on ESPN2 from the Kansas City Convention Center in Kansas City, Mo.

Hoffman said he was excited as he approached the stage to meet MLS Commissioner Don Garber after hearing his name called.

“It was unbelievable,” Hoffman said.

Hoffman became the first ever male soccer player from Shelby County to be drafted by a professional team. Hoffman became the 59th player in the history of the UCLA men’s soccer program to be selected in the MLS Draft.

Hoffman led UCLA to the College Cup, the Division I men’s soccer Final Four, last month at Regions Park in Hoover. Hoffman had been projected to go in the top three picks, including first overall in one mock draft, leading up to the draft.

Hoffman said he didn’t feel any stress after watching 12 players be drafted ahead of him.

“Obviously, you never know with these type of things,” Hoffman said. “It was definitely a great feeling to hear my name called.”

“We’re surprised he was still available,” Hackworth said. “A player of his quality, especially with him being a Generation adidas player, he was too good to pass up. We watched him, scouted him, have known him for quite some time. He’s a great person as well and willing to work really hard.”

Hackworth said he likes the versatility the left-footed forward brings to the team. Hoffman finished his junior year at UCLA tied for fourth nationally with 18 goals and 42 points scored.

“I think he obviously was pretty underrated because he’s consistently put the ball in the back of the net [in college], but he’s versatile too,” said Hackworth. “We feel he’s going to be a great attacking addition to our team.”

Twellman, the 2005 Major League Soccer Most Valuable Player and Golden Boot award winner, had high praise for Hoffman during the telecast.

Lalas, a former MLS general manager and member of the National Soccer Hall of Fame, said the Union are also getting an asset off the field in Hoffman.

“I think he has one of the best personalities in the draft,” Lalas said. “He has the ability to sell himself and to sell the game. These things are important.”

Hoffman was named the Gatorade Player of the Year in the state of Alabama following both his junior year in 2008 and senior season in 2009 at Oak Mountain. Hoffman tallied 121 goals, including 33 game-winning goals, 45 assists and 17 hat tricks during his high school career.

Hoffman will join a roster that includes Ghana-born Freddy Adu, who made headlines worldwide after signing his first professional soccer contract in 2004 at the age of 14. The Union roster also includes his former UCLA teammates Kyle Nakazawa and Amobi Okugo.

Hoffman will begin training camp Feb. 5 with his Philadelphia Union teammates in Orlando, Fla. The 6-foot, 160-pound striker will play in his first match, an exhibition, Feb. 18 against the Orlando City Lions.

The Union begin their season March 12 on the road at the Portland Timbers. The season-opening match will be televised live at 8:30 p.m. on ESPN2.

Hoffman said he is looking forward to visiting his new home city.