Living with a lost mind 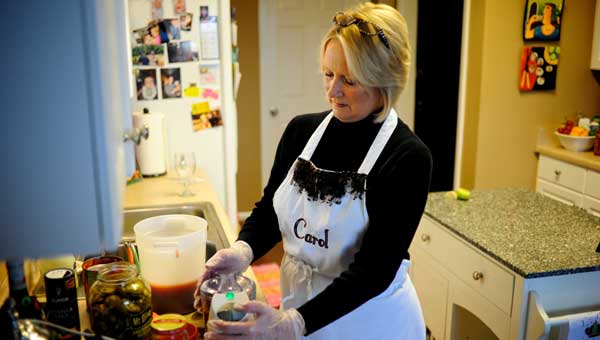 Carol Turner, whose mother recently died, prepares a meal for a client at her home. | Jon Goering

Five years ago, Carol Turner had a conversation with her father she will never forget.

“Sister,” he said to Carol, using his nickname for his only daughter, “your mother is losing her mind.”

Carol argued with her father. She told him they were just bickering. He left the room, but came back in and repeated his statement.

Not long after that, Carol’s father became ill and was diagnosed with congestive heart failure. He died four days later, but not before Carol had one last conversation with him.

“I promised him, so he could go ahead and just let go. I said, ‘I will take care of her. I promise you,'” Carol said.

It did not take long after her father’s death for Carol, who is now 61, and her two brothers to notice the change in their mother, Doris Means.

Carol lived in Calera, about 90 miles from her mother’s Attalla home, so she called her mother every morning and afternoon. She also visited Doris on the weekends to help with her medications and take her to lunch.

Finally, about six months after her father’s death, Carol brought Doris to the Kirklin Clinic in Birmingham, where she was diagnosed with Alzheimer’s – a form of dementia that affects a person’s memory, thinking and behavior.

There is no cure for Alzheimer’s and it worsens over time. An estimated 5.4 people in the United States are living with the disease, according to the Alzheimer’s Association. America’s population is aging rapidly, and it is estimated that number will grow to 16 million people in the next 40 years.

Friends and family members caring for people with Alzheimer’s and dementia numbered 287,605 in 2010. They provided more than 320 million hours of unpaid care valued at $3.9 million, according to the Alzheimer’s Association. The number of caregivers – like Carol – is expected to grow with the aging population.

Doris was still living alone at the time of her diagnosis, but Carol finally convinced her to move into Oak Landing, an assisted living home in Attalla.

During a visit with her sister, Doris became upset with the living arrangements. Her sister decided to take Doris to her house for the night. Carol said she warned her aunt that it would be in her mother’s best interest to leave her in the assisted living home.

“To make a long story short, Mother became very angry and started hitting at me,” Carol said. “We ended up having to call the police.”

Doris was taken to the geriatric unit at UAB, where she was evaluated and her medications were modified. Over the next few years, she moved in and out of different assisted living homes.

It was during this time that Carol, who had worked in the legal industry for 25 years, lost her job as an assistant for a law firm in Birmingham in the fall of 2010. When Doris had problems at another facility in February 2011, Carol decided to move Doris into her home in Calera.

Reaching out to an aging population

The decision to move a parent into a home is difficult. It is one that Debbie Battles at the Middle Alabama Area Agency on Aging (M4A) has seen many families consider.

One of 13 governmental Area Agencies on Aging in Alabama, M4A serves older individuals and their caregivers in Shelby, Blount, Chilton, St. Clair and Walker counties, according to the organization’s website.

“We try to keep up with these resources and what they have available so we can give those resources to the clients that come in to us,” Battles said.

One of the agency’s main goals is to keep seniors out of assisted living facilities. Battles said facility fees typically cost thousands of dollars a month.

Medicare will cover about three weeks in a facility when a senior has been discharged from the hospital. After that, if a senior is not eligible for Medicaid, he or she will have to pay the expenses out of pocket.

M4A works to match a senior with resources to stay at home, whether it’s providing meals or nursing care. Battles said this benefits both the senior and the community because of the savings.

“It’s usually better for that person mentally and physically, and it’s better for the community because if a person is at home, we can give them $700 to $800 worth of resources to help them stay in the home,” she said.

With the senior population in Shelby County increasing, Battles said M4A has worked to reach out to those seniors to let them know about its programs.

From daughter to caregiver

Carol made major adjustments to her life when she moved her mother into her home.

She gave Doris her room and moved into the guest bedroom. Carol set up the master bedroom like Doris’ old bedroom so it would feel familiar.

While Doris still recognized her daughter when she first moved into the home, her memory and sense of reality were swiftly fading. Carol wrapped duct tape around the doorknob on the front door to prevent her mother from leaving the house – Doris thought her husband was waiting for her outside.

“Then one Sunday, she just got really mad at me, because you see, she really wanted to leave and I wouldn’t let her,” Carol said. “That’s when I decided it was time for me to become her caregiver instead of her daughter. She would talk about her daughter, but she never recognized me as the same person.”

Carol was also facing financial problems. She had always been fond of cooking and had started a catering company. She found sporadic work cooking meals for clients, but it was hard to make ends meet. She was on unemployment benefits and struggled to pay her mortgage and utilities, which averaged about $2,000 a month.

Carol’s 33-year-old son also moved back in with her. He had found success as a realtor in Atlanta but struggled as home sales crept to a halt during the recession.

Her son assisted Carol in taking care of Doris. At times, Doris would sink to the floor when she got upset. Carol’s son would carry her to her room. Other times, she would return to her room on her own and slam doors and drawers.

Doris’ behavior became more erratic. Sometimes, she would go to the closet and remove all of the clothes and place them in boxes. She also began staying up all night, so Carol and her son would stay up with her in shifts.

Carol’s situation began taking a toll on her health.

One of Carol’s friends worked for a doctor and told her about Forest Pharmaceutical’s Patient Assistance Program, which provides certain medications free to patients whose income fall below certain levels. Through the program, Carol received a prescription for Lexapro, which treats anxiety and depression.

Help for the aging – and their caregivers

M4A also provides prescription assistance. The agency helps identify programs or companies, like Forest Pharmaceutical, that provide medication to seniors at a reduced cost or free. It also assists with the application process.

“It’s a lot of paperwork, and it can be overwhelming for somebody to do it themselves,” Battles said.

Once M4A is contacted by a senior or caregiver for any request, the first step the agency takes is to set up an in-house visit to assess his or her condition. Then the agency suggests programs that could benefit the clients, such as:

* Home and community-based services – in-home services and case management to help the elderly and disabled remain in their homes.

* Ombudsman services – information and advocacy to residents of long-term care facilities and their family members.

* Senior Employment Program – paid training program for older individuals to assist them to strengthen and improve their skill set to secure gainful employment.

M4A also has a caregiver support program that specifically helps people caring for family members or friends who are elderly or have dementia or a disability – Alabama Cares.

Alabama Cares, which currently has a waiting list, provides a few weeks of assistance with meals, transportation and in-home care. The program also provides counseling to teach the caregiver about dementia and Alzheimer’s and the programs that are available to them in the area.

“It’s a temporary solution,” Battles said. “While we’re doing that, we’re counseling them on how to accomplish their long-term goals as a caregiver by utilizing community resources.”

Through a friend, she was able to take advantage of a similar program.

“Hospice has so many areas beside last-hour care,” Carol said. “It was a big help … All of a sudden you can get a caregiver to come and give you relief twice a week.”

When a hospice worker visited a few days later, she told Carol that Doris was in the final stages of life. She died four days later on Aug. 11, 2011.

It’s been five months since her mother’s death, and Carol still struggles with it. She has been to visit her grave once, and she is glad her mother is finally at peace.

While the six months her mother spent in her home were challenging, Carol said she does not regret it.

“It’s the power of your faith. I would get up and go, ‘I can’t do this today.’ But somehow it would all come to be,” she said.

Carol’s financial struggles have not ended, however. She has interviewed for a few positions since she lost her job and continues to do sporadic catering work.

Carol still has hope that she will find full-time work. Just like the medical assistance program and the friends who helped her get her mother into a hospice program, she believes it will work out in the end.

“I’ve just been so blessed,” Carol said. “If you ever think that you aren’t, you just need to get in this kind of situation. Something always came up.”