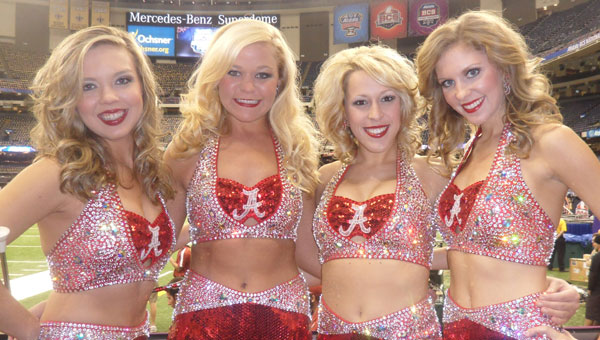 A senior at the University of Alabama, Nathan Gibson, has been in the Million-Dollar Band for four years and got to experience his first taste of the BCS this year, but he said his experience was bittersweet.

“My best friend is the starting right guard for LSU, Josh Williford, number 74,” Gibson said. “I’m overjoyed that we won obviously, but I wish they would have put up more of a fight.”

Gibson, who plays alto sax, did not get to attend the 2009 BCS championship game. He was one of 30 band members that didn’t get the opportunity to attend because of logistics.

“Getting to be in New Orleans was great, it’s a beautiful city,” Gibson said.

Gibson was a part of the SCHS 2008 class is majoring in computer engineering.

This year’s championship wasn’t Hannah Ray’s first championship experience. She cheered on the Crimson Tide at the Rose Bowl in Pasadena in 2009.

A 2009 SCHS graduate, Ray is a Crimsonette in her third year at Alabama.

“It was my first time to visit New Orleans when I was of age and could participate with the traditional visit to Bourbon Street and Canal Street,” said the accounting major.

“It was very different from Pasadena. It was much louder and more enclosed. It was almost a life-changing thing,” she said.

“It’s pretty great to be a student at the University of Alabama right now.”

“It was a great experience. I’m really thankful and blessed. Everyone was hyped up especially because it was against another rival SEC team,” Ray said. 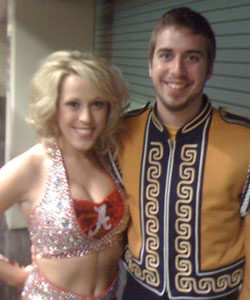 Wilsonville native and LSU band member Geoffrey Fuglaar said while he was glad to be part of the national championship, he felt like the game was anti-climactic.

“I don’t know if it’s how my team was playing or not, but it felt like any other bowl game,” Fuglaar said with a chuckle.

This is Fuglaar’s third year in the band at LSU, and the trumpet player said that he ended up in Baton Rouge by accident.

“It was my fantasy school, I took a shot and applied and I got in and got a scholarship,” he said.

Fuglaar will graduate in 2013 with a business management degree.

Chandall Phillips, a senior at the University of Alabama, graduated from SCHS in 2008 and has been playing the piccolo for four years with the Million-Dollar Band.

“I was in shock,” Phillips said of her experience. Phillips started her freshman band experience with a bowl game in the Mercedes- Benz Superdome in 2008 and finished out her senior year with a national championship title game in the same location.

“It was an emotional experience for me,” Phillips said.

Phillips will graduate in December of 2012 with a degree in collaborative special education, K-12.