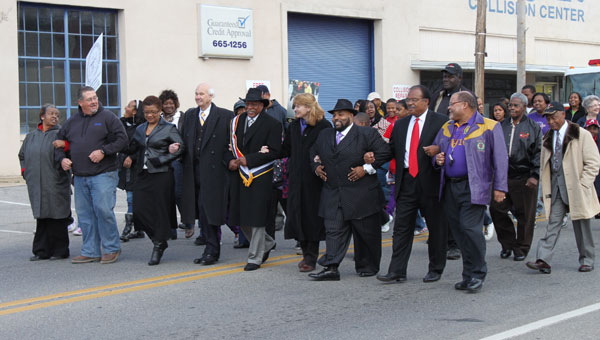 The parade climbed to Shiloh Missionary Baptist Church, with parade participants singing as they walked. Rev. Kenneth Dukes served as master of ceremonies.

“I was not only privileged to walk in the first one, but was privileged to be a part of the committee that started it,” Montevallo Mayor Ben McCrory said of the annual celebration. “Dr. King had a dream, and we’re keeping that dream alive.”

McCrory said the people who attended the parade “speaks volumes for how valued this parade in Montevallo has become.”

“We can’t be complacent. We have to strive each day,” Smitherman said. “We’ve got to make sure our young people get educated.”

Smitherman conclude by sharing the “three As of success,” which were attitude, appearance and ability.

Perkins used quotes from King and the Bible to show signs of leadership.

“The dream he had became our dream,” Perkins said. “Although a lot of Dr. King’s dream has been realized, we still have a lot to do.

“We’re here to pay tribute to one of the world’s greatest leaders,” Perkins said. “Dr. King was not a violent person, but accomplished all he did through peace,” he said. “Humility is another sign of a great leader.”