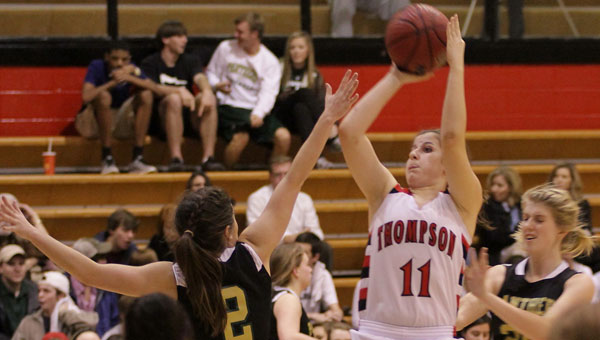 Lawley broke out with a 15-point, 15-rebound performance in the victory, which drew her plenty of praise from her head coach after the game.

“She was all over the place,” Crosslin said. “She’s stepped her game up drastically since Christmas. I can’t say enough good things about her.”

Thompson capped the first half with a 7-0 run and took its first double-digit lead in the game, 25-15, following a free throw by Kat Cingoranelli with 26.2 seconds remaining in the second quarter.

The Warriors pushed their lead to 18 points, 36-18, following a jumper by Lawley with 2:41 remaining in the third quarter.

Thompson led by as many as 24 points in the fourth quarter, the last time following a free throw by Oglesby midway through the final period. Pelham closed the game with a 16-3 run, but the Panthers couldn’t cut the deficit to single digits.

Crosslin said the win allowed the Warriors to cement their status as the second-best team in Class 6A, Area 10 play behind powerhouse Hoover.

“Our area is tough,” Crosslin said. “The kids are getting after it.”

FROM STAFF REPORTS The Thompson High School wrestling team defeated Spain Park 37-24 in a match Jan. 14 in the... read more