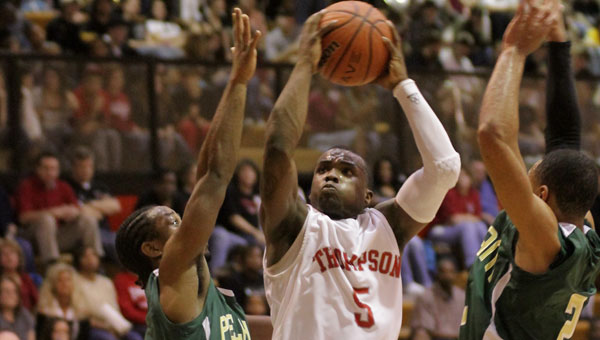 ALABASTER — Thompson High School boys’ basketball coach Patrick Davis didn’t experience any trepidation after watching the Warriors give up a double-digit lead in the second half against rival Pelham in an Alabama High School Athletic Association Class 6A, Area 10 battle Jan. 17.

Once Thompson senior guard Demarcus Threatt tied the game on a drive to the basket in the final minute of regulation and a last-second attempt by Pelham junior guard Willie Simpson came up short, the Warriors’ wisdom gained in previous overtime games this season became the deciding factor.

Thompson senior forward Jaylon Jones drove down the lane for a layup in the opening seconds of the extra four-minute period, which started a 7-0 run and helped the Warriors take down the rival Panthers 63-58 in overtime.

Davis called for the Warriors to attack the basket early in the overtime period to reclaim momentum lost in in the fourth quarter.

“We’ve got some experience in overtime games,” Davis said. “We’ve been there. Some of them were wins, some were losses. You learn something from each of them. Getting that early lead is huge.”

Caleb Johnson and Duke Thomas added four points each in the win.

The Warriors opened the game with a 9-0 run, which was capped with a spin move in the lane and a layup by Threatt with 5:13 remaining in the first quarter.

The Panthers rallied to cut the deficit to 11-7 following a jumper by Lacey with 1:58 left in the opening period. Gamble converted a three-point play in the final minute of the quarter to push the Warriors’ lead to 14-7 entering the second quarter.

Pelham trimmed the deficit following a pair of free throws by Williams with 6:38 remaining in the first half. Thompson responded with a 10-0 run, which was capped  with a pair of baskets by Jaylon Jones midway through the second quarter, to take its first double-digit lead in the game at 24-11.

The Warriors extended their lead to as many as 16 points late in the first half before Brooks knocked down a 3-pointer with nine seconds remaining in the second quarter to cut the Panthers’ deficit to 32-21 heading into the locker room at halftime.

The two teams battled down the stretch before a free throw by Williams gave the Panthers a 48-46 lead with 49 seconds left in the game. Threatt drove the lane for a basket with 41 seconds left to tie the game at 48-48.

Pelham held the ball until the final seconds before a jumper from the corner by Simpson came up just short with two seconds remaining.

Thompson began the overtime session with a 7-0 run to take a 55-48 lead following a layup by Gamble with 2:27 remaining. Two late 3-pointers by Meadows weren’t enough to help the Panthers overcome the deficit.

Meadows knocked down a 3-pointer with 9.4 seconds remaining to cut the deficit to 61-48. The Panthers forced a turnover by Thompson, but Meadows’ game-tying attempt was partially blocked.

Davis praised Jones and Threatt for their savvy play in the final four minutes.

Pelham coach Joel Floyd said he was pleased with the Panthers’ ability to force the  game into overtime despite a double-digit deficit in the second half in a tough environment on the road.

“That showed the resiliency of our players,” Floyd said.

The two rivals will meet again Thursday, Jan. 26, with the second meeting scheduled to be televised by My68 as part of the network’s “Thursday Night Nets” programming. Tipoff is scheduled for 7 p.m.