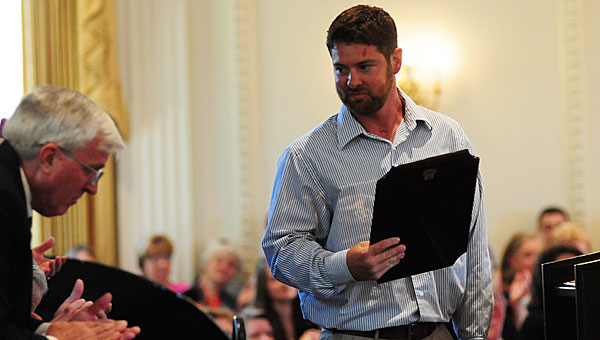 Army officer Noah Galloway, right, will travel to Washington to attend the State of the Union address on Jan. 24 after he was invited by U.S. Rep. Spencer Bachus, R-Ala. (File)

An Alabaster resident and veteran who was wounded during the Iraq War in 2005 will join U.S. Rep. Spencer Bachus, R-Ala., in Washington for President Barack Obama’s State of the Union address on Jan. 24.

Bachus invited Alabaster resident Noah Galloway, who served as a member of the U.S. Army’s Bravo Company, 1st Battalion, in the 101st Airborne Division’s 502nd Infantry Brigade during his two tours of duty in Iraq.

In 2005, Galloway lost his left leg and left arm when he was severely injured by a bomb blast in Iraq, and is now fitted with prosthetic devices. Since his injury, Galloway has traveled around the country to speak on behalf of injured veterans.

“Personally, I will be honored to have Noah Galloway as my guest,” Bachus wrote in a press release. “Noah served our country with valor during two tours of duty in Iraq and his courage in overcoming the severe injuries he suffered in battle is a source of inspiration.”

Galloway will sit with Bachus in the House gallery in Washington as Obama delivers his address.

Galloway said he was “honored” to receive the invitation.

“It is an honor to have the senior member of the Alabama House delegation invite me to the State of the Union Address,” Galloway wrote in a press release. “The fact that four congressmen from both sides of the aisle have joined together, even though their political views may be different, shows a lot of respect for our troops and veterans.”