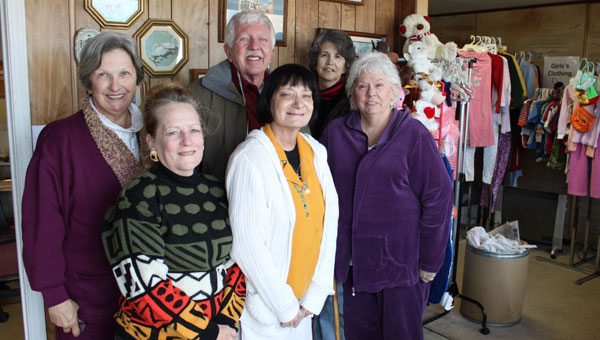 CALERA – Shiloh’s Place is a ministry in support of not only those in need, but also other ministries serving Shelby County.

Myrna Wood and other women of Shiloh United Methodist Church felt the need to begin a thrift store in the city of Calera. Two years ago, Shiloh’s Place Thrift Store was up and running.

The store is run by volunteers, and all proceeds above the cost of utilities go to local missions.

“We give to anyone in need,” Wood said. “We give to organizations inside the United Methodist Church — clothing or whatever they ask for.”

After the tornadoes in April, Wood said several organizations came to Shiloh’s Place for assistance in supplying the needs of victims. The West Shelby Fire Department took donated stuffed animals to young victims, she said.

The thrift store also offers a bread ministry to those in need of more than clothing. Bread, cookies and other baked goods are donated by the Calera Publix.

“One of our members had this building, and it was a salon. The owner (of the salon) retired two years ago,” Wood said. “The building was in disrepair. The owner came and said she wanted something in the building, so she donated the use of the building.”

Even with the donated space, the amount of tax-deductible donations given to Shiloh’s Place overwhelms the shelves.

“You never know one day to the next what you’re going to receive,” Wood said.

As a part of the United Methodist Church, Shiloh’s Place’s profits are required to support missions. The leaders of Shiloh’s Place decided sanction the profits specifically for local missions and ministries.

“It’s not just Calera, but all over the state,” Wood said.

“I feel personally the Lord has laid on me to do this ministry for other missions. It’s a tremendous blessing every day,” Wood said.

Shiloh’s Place Thrift Store is located on U.S. 31 by the Dollar General in downtown Calera. For more information about the thrift store or Shiloh United Methodist Church, contact the church at 668-4377.