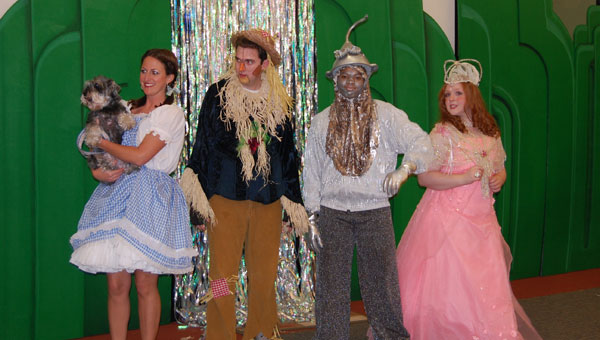 CALERA – Fairy tale characters will come to life all over Calera on Feb. 18.

The day of the fourth annual Fairy Tale Ball will kick off with a breakfast at Calera High School at 10 a.m. Forty professionally costumed characters will mingle and play with children during the hot breakfast buffet. Tickets are $10 per person, and reservations are required.

The princess tea will be just for girls. Starting at 2 p.m. at CHS, girls will join fairy tale characters in learning about etiquette.

“Girls will have a female character sitting with them, and it will be an etiquette lesson with the girls. They’ll have hot tea or punch, frou-frou cupcakes and a flowing chocolate fountain,” said Rhonda Cracraft, vice president of the Friends of the Calera Public Library. “The girls dance and play with the princesses. It is a real tea. Mommies come dressed up with hats on, and the girls are dressed up too.”

Tickets to the princess tea cost $10 per person, and reservations are required.

The ball itself begins at 6 p.m. at the Calera Public Library. Cracraft said the ball will begin with the seven dwarves singing and “cracking open” the rocks concealing the ball.

At 7 p.m. the dancing will begin. A father-daughter dance and mother-son dance will kick off the ball portion, and characters will emerge from their respective scenes to dance with the children.

Horse-drawn carriage rides in Cinderella’s pumpkin-shaped carriage will be held in front of the library for $5 per ticket.

“It’s such a wonderful event. It’s a way of opening up the library so children don’t think it’s just a place for books but a place where books come to life,” Cracraft said. “Not the ‘Disney-esque’ version of the story, but the true version of the story. We wanted to be sure those stories came to life for the kids.”

The Fairy Tale Ball, held at the Calera Library, is a free event and open to the public. For more information about the events, call the library at 668-3514.

Confederate Army officer John Pelham gave the city of Pelham its name after historians said he helped set up a... read more