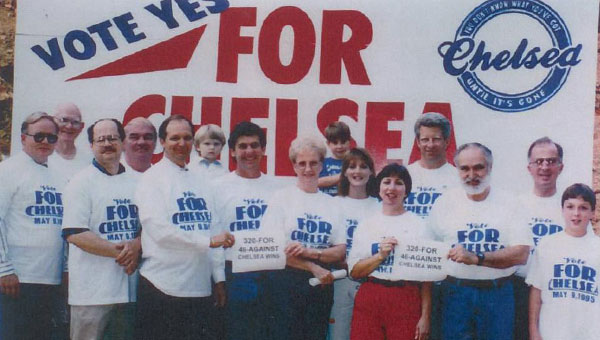 CHELSEA – Residents of Chelsea in 1995 knew the community needed to incorporate to ward off the annexation plans of surrounding municipalities.

“It started with the fire department having a meeting at the (Chelsea) high school to purchase a new fire truck. The last item on the agenda was ‘future of the community,” said Chuck Lewis, an original member of the incorporation committee.

If the fire station were built, the high school would be in Pelham. And so, after the meeting, about 70 people came forward to discuss incorporation of the Chelsea community to prevent the fire station from being built, Lewis said.

“It was not just Pelham,” Lewis said, also mentioning Birmingham and Hoover. “Everybody saw the next big commercial development was on this side of the mountain, and they wanted the tax base.

“Chelsea felt strongly about the new high school,” he added. “They didn’t want it to belong to another school district or town.”

The process of incorporation was documented recently in the “Incorporation History of Chelsea, Alabama.” The 150-page book traces the documentation and efforts required to legally incorporate Chelsea.

“I had several friends on this committee, and after I got elected, they started telling me the story,” Champion said. “A few people accomplished a monumental task in such a short amount of time. I felt it should be recorded for history.

“In June, all of them had lunch at my house, and they started reminiscing about it, and we recorded it,” she added. “Chuck (Lewis) would take the recordings and type up whatever was said that time. We kept it chronological.”

A copy of the book was donated to the Chelsea Library for public use. The book will also be in a Chelsea museum, which will be located in City Hall.

“We’re in the process of staring a museum. We have some artifacts and have found some antique showcases,” Champion said. “We have several artifacts from that (the incorporation). The T-shirts and signs. That was kind of what revived in pushing this (creating a written history). I wanted to have something to go in the museum.”

Champion said the museum will exhibit whatever citizens will loan to display.

We’ve asked for anything that came from early Chelsea,” she said. “The museum is in its infancy. We’re just trying to get it started. We’re willing to accept relics on a loan basis, if they want us to display it.”