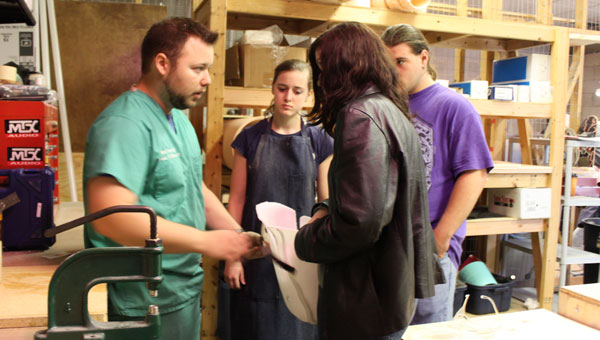 The students of Brian Copes’ engineering class watched as Next Step’s prosthetist Adam Williams cut the plastic for a future prosthetic “socket.” The socket is the piece that attaches the prosthetic leg to the person’s leg, Williams said.

The prosthetic leg itself was made from motor mounts and aluminum, and it weighs about six pounds, senior Tyler Pearce said.

“The first leg was made out of steel pipe,” Pearce said. “We’ve made some modifications, but it’s still in prototype form. It works just like an ordinary prosthetic leg.” 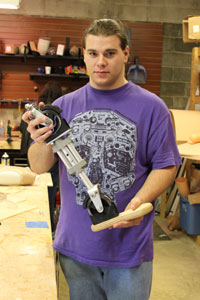 Tyler Pearce holds the prosthetic leg the engineering class developed over the past year and a half. (Reporter photo/Christine Boatwright)

As the students plan to take the prosthetic legs to those in need in Honduras during the summer, Williams, Copes and the students endeavor to develop a prosthetic that is adjustable and practical.

“This will give more flexible function,” junior Korien Custard said of the leg socket. “We’ll put a strap over it and put rubber on it so it’ll fit the leg.”

As prosthetics are made custom-fit to the person, the rubber and adjustable strap will enable the Hondurans to use the prosthetic without a customized fit. The group will create small, medium and large options to fit the Hondurans.

“We’re developing an ‘off the shelf’ prosthetic leg,” Williams said. “They will be functionally comparable to modern prosthetic. The part that attaches to the leg is always built custom to the person.”