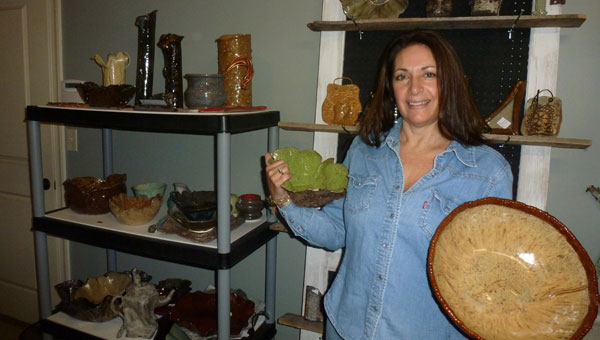 Stephanie Dikis holding some of her pottery in her workroom. (Contributed)

The Fifth Annual Have a Heart for the Arts fashion show and luncheon to benefit the Shelby County Arts Council will be Feb. 11 at First Baptist Church of Columbiana, one of the hottest and fastest-selling tickets in Shelby County.

Stephanie Crandell Dikis has been greatly involved with the luncheon since its inception. She has designed the tickets, brochures and programs as well as set. She also made and painted the huge signature “Heart” logo, originally designed by Jon Falkner, that decorates the stage each year.

Dikis grew up in Albuquerque, N.M., and inherited the creative gene from her parents who both loved to work with their hands. Dikis met future husband Jimmy, who grew up in Hoover, at a wedding of mutual friends. Jimmy and Stephanie are both of Greek descent and are very active with their church, Greek Orthodox Cathedral of the Holy Trinity-Holy Cross. The Dikis family moved to Columbiana from Hoover in August 2004, prompted by a desire to live a simpler lifestyle.

New friend Lisa Davis invited Dikis to join the Community Bible Study and Vignette Club. Dikis also heard about a new arts group that taught classes. In 2005, Dikis took her first instruction class in precious metal clay and then moved on to pottery classes, taught by Susan Dennis Gordon at the Shelby County Arts Council. She has never left.

“It has been so exciting to watch Stephanie find her voice and for her talent to grow,” said Gordon.

The student has now become the teacher. Dikis teaches both beginning and intermediate pottery classes at the SCAC.

“The Shelby County Arts Council is a true treasure in Shelby County and in the state of Alabama,” said Dikis. “It is an outlet and model to bring the arts to so many: school children, special needs children, Juvenile Detention Center, elderly, literally all ages. I have seen how art brings out a new part of you. The SCAC supports their artists to go to the next step, which the Artist Market does.”

Dikis uses her talent in not only the stage design on the Heart luncheon but also the Miss Shelby County Pageant, which the Vignette Club produces. She has designed the set and programs since becoming a member in 2005.

To see more of Dikis work, go to Steveedesigns@etsy.com. Tickets for the Heart luncheon are $25 and are available at SCAC, 669-0044.

Susan Dennis Gordon has a Heart for the Arts

The Swan Artist Susan Dennis Gordon, director of the Shelby County Arts Council, in front of one of her “Organelle”... read more