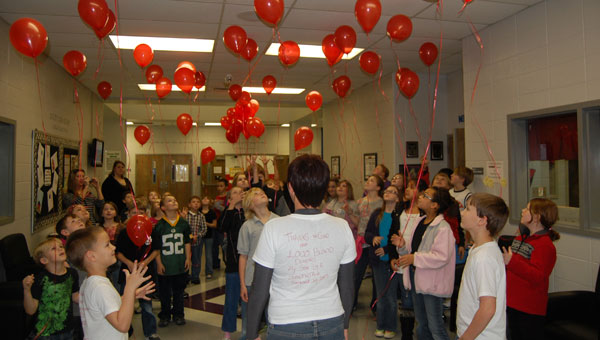 Students at Shelby Elementary School let balloons go inside in a symbolic ceremony for Kawasaki Disease Awareness Day. In the white shirt on the left is Ruger Bean, who suffers from the disease. (Reporter photo/Amy Jones)

SHELBY — On Jan. 26, Shelina Bean wore a white T-shirt with a stark message printed in red: “Thanks to God and 1,000 blood donors, my son is a survivor.”

Her 7-year-old son, Ruger, was diagnosed in July 2007 with Kawasaki disease, which involves inflammation of the blood vessels and can lead to temporary arthritis, temporary hearing loss, abdominal pain and an enlarged gallbladder, among other health problems. The disease does not have a known cure.

“It takes 1,000 pints of donor blood to stop the effects” of Kawasaki disease, Shelina Bean said. “They don’t know all the long-term effects of this disease.” 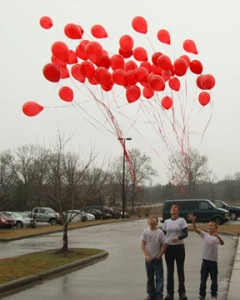 Because of the rain and lightning, the children were not able to let the balloons go in the schoolyard as planned.

Rather, the children carried out a symbolic ceremony where they let the balloons go inside the school, then Shelina, Ruger and his big brother, Colt, took the balloons outside.

After letting the balloons go, Colt Bean said he was glad his classmates understood more of what his little brother had to go through.

“It means a lot to me. All our friends can go home and tell their parents about it,” Colt Bean said.

Ruger Bean said his friends have helped him through the hard times. He suffers from arthritis in his legs, and when they hurt, his friends help him.

“It means a lot to me because all my friends know how I feel sometimes,” he said.

However, Kawasaki disease hasn’t stopped Ruger from partaking in his favorite sport — basketball.

Shelina Bean said she intended the balloon ceremony to celebrate Ruger and his triumph.

“I think it’s a celebration of life — of his, of how he’s made it so far with everything that’s happened to him,” she said. “And it helps the kids understand, ‘This could be your little brother or sister.’” 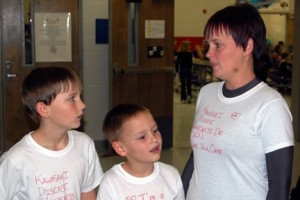