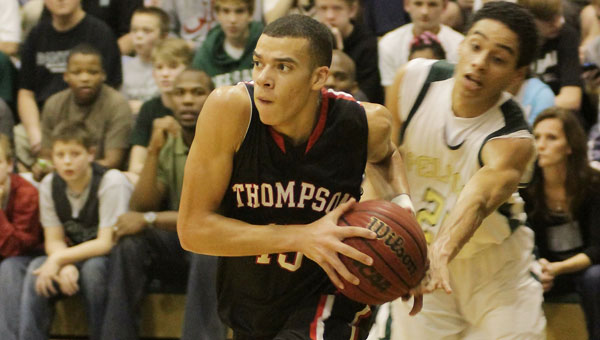 Demarcus Threatt scored 15 points and Duke Thomas added 12 off the bench Jan. 26 for Thompson as the Warriors took a 58-52 victory over Pelham.

Thompson led only 9-6 after the opening quarter but held the Panthers scoreless for over seven minutes as the Warriors (18-7, 4-2 Area 10) built a 12-point lead in the second quarter.

Junior guard Justin Brooks, who finished with a season-high 24 points, sparked the late second quarter run for Pelham as he scored eight of his team’s 10 points in just over a minute of play and helped trim the Thompson lead to 26-20 at halftime.

The Warriors hit 63 percent of their shots in the opening half, connecting on 10-of-16 field goals.

The Panthers were hampered by turnovers in the game, committing 19 in the game, including 13 before intermission.

Brooks was the only Panther to have consistent offensive success against the Warriors as he hit 8-of-13 field goals overall and 4-of-7 from three-point range.

While Threatt led Thompson in scoring for the game, it was Thomas who ignited the second quarter surge for the Warriors, scoring eight points in the period on 4-of-5 shooting.

Leading by six heading into the third stanza, Thompson outscored Pelham 11-5 in the first 4:14 of the quarter to build a 37-25 cushion.

Thompson’s Jaylon Jones converted on an old-fashioned three-point play with 6:28 to play to help the Warriors mount their largest lead of the contest at 45-31.

Pelham outscored the Warriors by an 8-2 margin in the final :42 to trim a 56-44 deficit to the final six-point margin.  Qadash Williams, who finished with eight points and a game-high 11 rebounds, scored six of the Panthers’ last eight points.

Thompson’s final seven points of the contest came from the free throw line.

Warrior guard Jaalen Jones was his team’s third double-figure scorer in the game as he tallied 10.  Thomas was the team’s leading rebounder with seven.

Pelham, which out-rebounded Thompson by a 32-24 count, hit 46 percent of its shots in the game and was 7-of-12 from beyond the arc.

The Panthers didn’t help themselves from the free throw line, hitting only 7-of-14 from the charity stripe.  The Warriors were 13-of-20 from the line.

Senior Xavier Lacey, the Panthers’ top scorer this season at nearly 14 points per game, was held in check by the Warriors for most of the game.   Lacey finished with only nine points and was only 3-of-7 shooting.