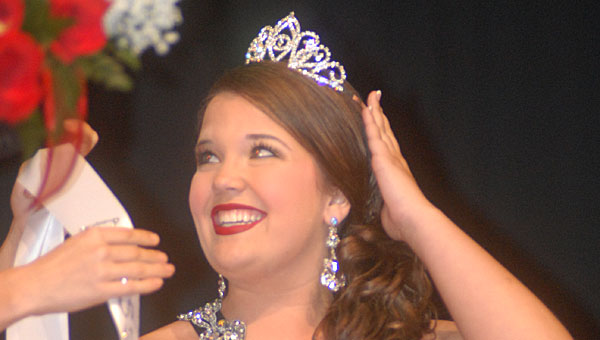 Pelham High School senior Bethany Wood reacts as she is crowned Miss PHS 2012 during a Jan. 28 pageant at the school. (Reporter Photo/Neal Wagner)

The pageant, which was held in the school’s auditorium, featured 62 contestants representing every grade level at PHS.

During the pageant, which was emceed by PHS teachers Karen Varner and Keith Beard, all 62 contestants performed beauty walks before the competition was narrowed to the top 25 girls.

The top 10 contestants then answered on-stage questions ranging from “If you were principal of PHS for a day, what would you change and why?” to “What do you think is the biggest issue facing teens today?”

Wood’s question was “If your life was a reality TV show, what would it be named and why?” Wood, a member of the PHS colorguard, said the show would be named “Laughing all the way,” and said she tries to make happiness and laughter part of her everyday routine.

“To quote Charlie Chapman, ‘A day without laughter is a day wasted,’” Wood said in her answer.

McDonald was named Most Photogenic and Ray was named Miss Congeniality. Cameron Foss was named the pageant’s Best Escort.

Pageant director was Jenni Russell, and Emily Smith, Koren Lee and Meghan Patterson were assistant directors. Gentry Bass and Mitchell Morin handled lighting and sound, and the PHS Jazz Band provided music throughout the contest. Miss PHS 2011 Brooke Goldman passed her title on to Wood during the crowning ceremony.