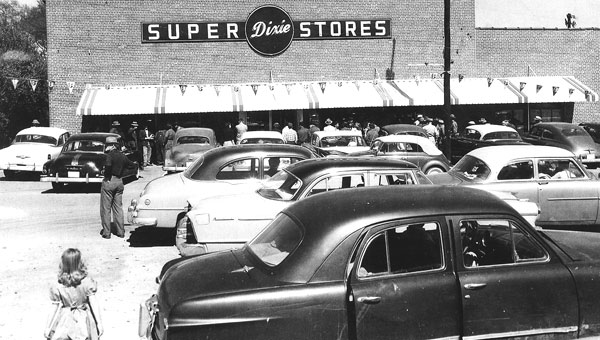 Sav Mor Food Outlet will roll out the red carpet Feb. 8-14 for its loyal customers and employees. For 50 years, Sav Mor has proudly served Calera and surrounding communities with dedication to excellence.

The golden anniversary celebration will include employees dressed in 50s and 60s attire. Men will wear white shirts and ties, ladies will dress in long skirts and rolled-up blue jeans — even hairstyles will be retro. A special flyer that week will advertise the lowest prices seen in years. Complimentary refreshments will be served and door prizes, including a big screen television, will be given away.

Sav Mor’s history in the grocery industry began in the early 1940s. John L. Davis, Sr. worked for A & R Foods on Southside in Birmingham. He bought the company in 1947 and added a location in Homewood. Taking in interest in rural areas south of Birmingham, he opened a Clanton location in 1957. Calera and Brent locations opened in the early ‘60s. The company added many locations over the years, but today only stores in Brent, Calera, Clanton and Leeds remain.

“The store names have changed over the years, but up until the 80s the stores operated under the name Dixie Super Stores,” Davis said. “When the store was located in the Family Dollar shopping center, everyone knew it as ‘The Dixie.’ Around 1980, Sav Mor became the prefix for Associated Foods and then Warehouse Foods. In 1991 we relocated to a new building, our current location on Alabama 25 across from Calera City Hall and Central State Bank. Tony Adams is the store manager.”

Davis credits the store’s success to loyal customers and employees. “We are blessed and we do our best to give back to the surrounding communities’ schools, civic groups and churches. Even if not monetarily or donations in kind, time is a very valuable commodity that most all of us can afford to share.”

The celebration lasts only a week. Join the fun and fanfare, taking advantage of bargain prices you won’t want to miss.