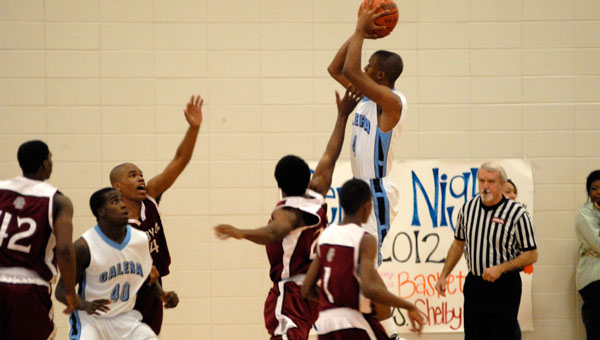 CALERA — Calera High School boys’ basketball coach Robert Burdette can’t put a finger on any specific reason the Eagles have been sputtering to the finish line at the end of the regular season.

Following a quartet of tough losses down the stretch, Calera cured some of its ills Jan. 31 in a 73-68 win over rival Shelby County in the Eagles’ first home game in nearly three weeks.

“Playing at home is a remedy for some of it,” Burdette said. “I think our effort was better. I think we just played harder than we have been playing.”

Junior forward Tyler Madison led Shelby County (8-17) with a game-high 36 points. Madison finished a perfect 11-of-11 from the free-throw line.

The Wildcats jumped out to an early 6-2 lead following a basket by McKinney with 6:34 remaining in the opening quarter. Calera responded with a 8-2 run, capped with a layup by Haynes, to take a 10-8 lead with 3:12 left in the first quarter.

Shelby County carried a 16-14 lead into the second quarter following a 3-pointer by Martin with 16 seconds left in the opening period.

The Wildcats extended their lead to three points, 18-15, following a layup by Hall, one minute into the second quarter.

Calera took control midway through the second quarter to take the largest lead by either team in the opening half, 37-30, following a three-point play by Haynes. The jumper and free throw by Haynes capped a 6-0 by Calera to end the first half.

The Eagles extended their lead to nine points, 39-30, in the opening seconds of the third quarter following a layup by Clark.

Shelby County cut the lead to two points twice midway through the period following a pair of baskets by Madison, but a layup by Titus Adams with 1:33 remaining in the third quarter capped a 9-0 run by the Eagles and gave Calera its first double-digit lead in the game, 52-41.

The Eagles pushed their lead to as many as 15 points, 62-47, following a layup by Titus Adams with 6:16 remaining in the game. Shelby County responded with a 17-6 run to cut the deficit to four points following a steal and a fastbreak layup by Martin with 57 seconds left in the game, which left the Wildcats trailing 68-64.

However, Madison picked up his fifth foul moments later, which left Shelby County without its top scorer in the final minute.

Haynes scored a basket and knocked down 3-of-4 free throws in the final minute to ice the Eagles’ victory.

Burdette said he saw promising signs in his team, but the Eagles can’t afford to overlook games against Thompson and Pelham in preparation for the upcoming Alabama High School Athletic Association Class 4A, Area 8 tournament.

Calera will face Midfield, which owns six consecutive victories over the Eagles the past two seasons, in the Class 4A, Area 8 tournament semifinals.

“We’ve got to be better than we were yesterday after each practice,” Burdette said.