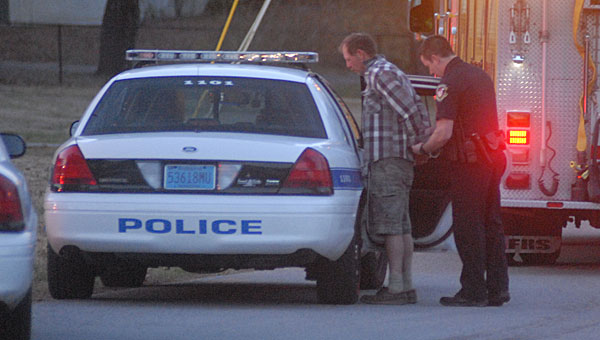 An Alabaster police officer handcuffs Helena resident Micheal Eugene Skinner and loads him into the back of his patrol car. Police charged Skinner with one count of assault after officers said he stabbed a man in the 1400 block of Allen Drive. (Reporter Photo/Neal Wagner)

A 56-year-old Helena man is being held in the Shelby County Jail on a $30,000 bond after police said he stabbed a man at a residence off Allen Drive on Jan. 30.

Police arrested Micheal Eugene Skinner at about 5:10 p.m. on Jan. 30 and charged him with one count of first-degree assault after officers received a report of a stabbing in the 1400 block of Allen Drive, which is off Shelby County 68 near the Pelham-Alabaster line.

After the incident, a male victim was transported to the hospital, where he was still being treated on Jan. 31 for non life-threatening stab wounds to his chest.

As of Jan. 31, police had not yet released the victim’s name. Alabaster Deputy Police Chief Curtis Rigney said neither Skinner nor the victim lived at the Allen Drive residence.

Neighbors who were gathered near the stabbing scene said several cars had come and gone from the residence throughout the day.

The 5:10 p.m. stabbing was the first of two calls emergency personnel responded to at the Allen Drive residence on Jan. 30. A few hours after more than 10 police cars, fire trucks and ambulances responded to the stabbing call, several police cruisers and three fire engines responded to a fire call at the same house.

Rigney said emergency responders did not discover a fire at the residence during the second call, but did find a natural gas leak.