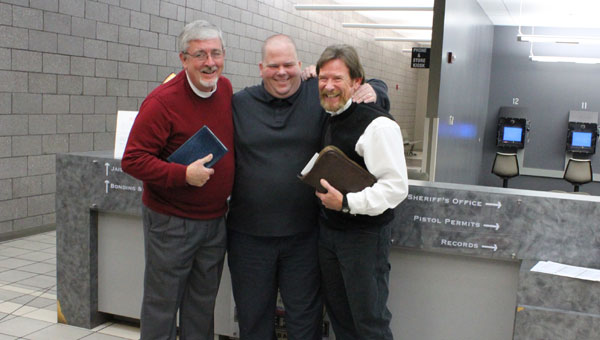 Eddie Burchfield hasn’t led a typical life for an evangelist.

Burchfield grew up in Bessemer, and while he said he had a good family, the family rarely attended church. He hunted and fished like a typical young boy until he hit his teenage years.

At 13 or 14, Burchfield picked up the guitar, and by 15, Burchfield was in a band called “Their Satanic Majesties Request,” after a Rolling Stones’ song, he said.

“This set the stage for years of drugs and alcohol,” Burchfield said.

Burchfield was drafted into the U.S. Army in 1971 “against my will,” he said, as he opposed the Vietnam War. While in the service, Burchfield got married.

While working at the Redstone Arsenal in Huntsville, Burchfield joined the 55th Army Band playing bass guitar and percussion. He started selling drugs to the other band members, and in 1973, he was “busted” and honorably discharged, “which was a miracle in itself,” Burchfield said.

His life began to change in January 1975 when Burchfield’s wife became a Christian.

Burchfield’s wife ignored her husband and invited people to come and witness to her husband. He said he was generally rude, cursed and fell asleep while the people witnessed, but when he awoke, they were still there.

After his wife said he would have to go to church or go “somewhere else,” Burchfield agreed to attend church with her. He arrived at the Church of God of Prophecy in Bessemer that night high on cocaine and “dope.”

“They’d been praying for me for a long time,” he said of the church members. “I went to church, and they came, shaking my hand and saying they were glad I was there. My defense shield was down, and I was like a deer in the headlights.”

During the testimony service, Burchfield heard the stories of believers.

“It was like an angel grabbed me by the collar, and I stood up and said, ‘I might be the worst sinner here,’” he said. “The Lord spoke to me. Every time I think about this, it’s like it’s brand new.

“The pastor called me Brother Eddie for the first time,” he said. “For 36 years and eight months or so, I’ve not had one desire for cocaine.”

In addition to working for ALDOT as a permit manager in Calera, Burchfield spends his Tuesday evenings at the Shelby County jail, joining with other ministers and men of faith to minister to inmates.

“You go in, and they shut the door behind you,” he said. “In all this time, I haven’t felt one bit of fear.

“I tell them, ‘Men, let’s crack the book and take a look. Do you want to be a crack addict? Let’s crack the book,’” Burchfield said of how he begins his ministry. “I’ve got men who wrote me letters who are free, free in Christ. I’ve seen them cry like babies, which is one of the most beautiful sights you can see, seeing a man pray to God.”

FROM STAFF REPORTS The Pelham Family Branch YMCA has received more than $450 in both funds and equipment from Cahaba... read more