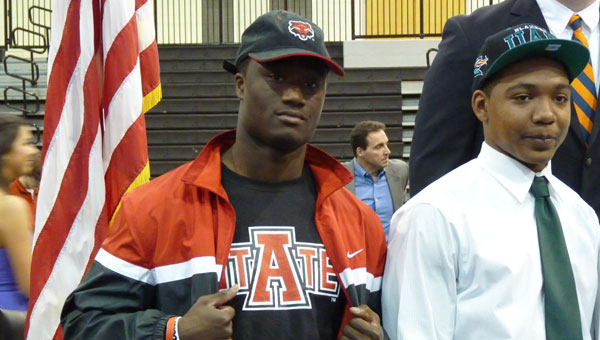 HOOVER — Spain Park senior cornerback Chris Humes went to bed Jan. 31 planning to spend the next four years of his life in Fayetteville, Ark. at the University of Arkansas.

When he woke up Feb. 1, the morning of National Signing Day, his destination had shifted about 300 miles east to Jonesboro, Ark. — the home of Arkansas State University.

Humes said the seeds of his signing day switch were planted during an official visit to Arkansas State the weekend of Jan. 28.

Humes said as soon as he woke up on Feb. 1, he knew he wanted to be a Red Wolf. He said Malzahn was happy to get the news.

“He was very excited because he feels like I can be a big part of what they’re doing this upcoming year,” Humes said.

Humes, who said he’s looking to get immediate playing time, plans to enroll in June.

Humes’ mother, Dorcas, said she was thrilled when her son decided to sign with Arkansas State.

“Coach Malzahn is going to make a great change at that university,” said Dorcas Humes, who accompanied her son on his Arkansas State visit. “I love it. I’m excited he feels Chris can be a big part of that.”

Humes said he doesn’t plan to stop at Arkansas State.

“If I have the potential to go pro, I would love to do that,” he said. “But I have to get my degree. That’s first and foremost.”