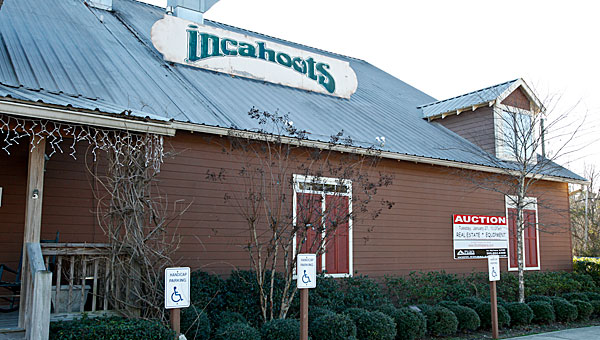 Crews are working to renovate the former Incahoots building in Helena to house the Papa Saia's restaurant and sports bar. (File)

A new restaurant and sports bar could be open in Helena’s former Incahoots location as early as March, as crews recently began renovating and upgrading the building on the bank of Buck Creek.

The owners of Papa Saia’s, a restaurant and sports bar currently in Alabaster’s Colonial Promenade shopping center, are planning to move their business to the former Incahoots building, which has been vacant for nearly two years.

Papa Saia’s owner Tammy Casteel said she thinks the new location will be “great for business,” and said she plans to fully utilize the restaurant’s location overlooking the Buck Creek dam.

“Half of the building will be a bar and the other half will be a restaurant,” Casteel said, noting crews have already begun renovating and restoring the former Incaoots building. “We are going to have a tiki bar out on the patio.”

In December 2011, Keith Mitchell, owner of the DCR Holding Company, closed on a deal to purchase the old Incahoots, and was quickly approached by several interested restaurants.

“There was a tremendous amount of activity that happened after I bought the building,” Mitchell said. “There were about four or five really interested restaurants, and three made offers for leases.”

Casteel said since Papa Saia’s made a successful offer to lease the building from Mitchell, Helena residents and officials have been “extremely supportive.”

“The people in Helena have been great,” Casteel said. “This is a perfect location. There are so many great festivals in Old Town Helena and at the amphitheater.”

Casteel said crews are working to have the building ready to open in March.

“We are real excited about it. We needed something in that building,” said Helena mayor’s assistant Joy Childers. “I think they are trying to be open before the Buck Creek Festival.”

Casteel said she was unsure when the Papa Saia’s in Alabaster will close. She said the new location will feature a wing bar, live music and plenty of televisions to show sports events.

“They’re going full speed ahead right now,” Mitchell said. “The people of Helena have been so nice.”

By NICOLE LOGGINS / Staff Writer Harpersville – Everyone is invited to ‘walk a mile in my shoes for heart... read more