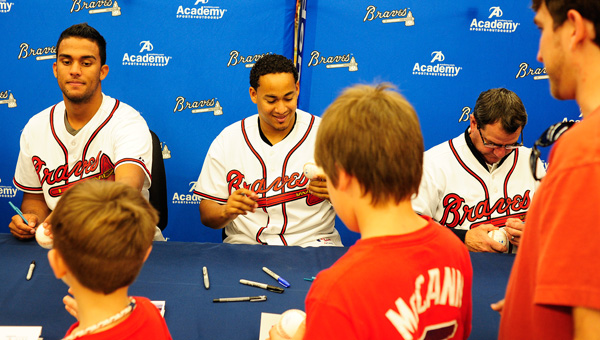 HOOVER — Atlanta Braves’ All-Star pitcher Jair Jurrjens doesn’t get many opportunities to interact with the teams’ fan base outside of Turner Field.

A visit to the Academy Sports and Outdoors location at Lee Branch by Jurrjens, along with teammate Randall Delgado, bench coach Carlos Tosca, general manager Frank Wren and baseball Hall of Famer Don Sutton, put the Curacao native up close and personal with his admirers during the Major League Baseball team’s “Country Caravan” stop in Hoover.

A crowd of more than 100 metro Birmingham residents waited with baseballs, photos and other memorabilia in hand to greet the group during an autograph session inside the Hoover sporting goods retailer. Several more arrived during the autograph session from 4 p.m. to 5:30 p.m.

“It’s awesome to go around and see how many fans we have,” Jurrjens said. “We do this for the fans. It’s a good feeling that people are anxious to see you back on the field.”

Sutton, an Alabama native, said he enjoys traveling with the team each January and February and meeting with Braves fans in person.

“(The Braves) have some of the best fans in the country,” said Sutton, a member of the Braves’ radio broadcasting team. “I probably have enjoyed it more than anyone else.”

North Shelby residents Mike and Teresa Newton were among the crowd waiting to get autographs from the group. The Newtons brought with them a family photo taken with Wren before a game against the New York Yankees a few years back, along with a photo of the family with Yankees’ star Derek Jeter taken by Wren, to get the Braves’ general manager to sign them.

“We came out to relive a few memories,” Mike Newton said.

Jurrjens and his teammates will begin the spring training portion of the Braves’ schedule Saturday, March 3 against the Detroit Tigers in Orlando, Fla.

The hard-throwing right-hander said the Braves are ready to get started and put a disappointing end to the 2011 season behind them. The Braves just missed the National League playoffs after losing eight of their final 10 games.