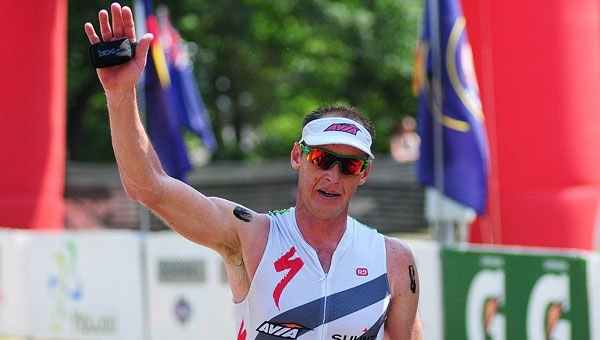 If the past is any indication, the first-timers will be back to visit the rolling hills and beautiful valleys often, said Pelham Mayor Don Murphy.

“Word gets around,” said Murphy, who anticipates 500-600 newcomers in town for the championship event. “Each one of them keeps wanting to come back.”

“The triathlon and multisport family is extensive and far reaching, and ITU is delighted to form a partnership with XTERRA for our 2012 Cross Triathlon World Championships. We are confident the strong race organization and dynamic course will continue to push Cross Triathlon to a new level,” said Marisol Casado, ITU president and IOC member.

“We’re excited,” said Oak Mountain State Park Superintendent Michael Jeffreys. “There will be people coming from all over the world. It will be great for our city and county.”

Stoltz, one of the world’s most accomplished triathletes, has long been a fan of Oak Mountain State Park.

“Oak Mountain State Park is amazing, and I know I speak for all of us when I say we love racing there,” said Stoltz, who has won the last five Southeast Championship races. “It’s a true XTERRA course with a nice warm water swim in a beautiful lake, a real mountain biker’s course with climbing, technical sections, and fun corners, and a tough but scenic run.”

The event will feature $20,000 in prize money for elite athletes, who will compete over a 1.5km swim, 30km mountain bike and 10km trail run.  Under-23, junior, age-group and paratriathlon races will also be contested in Pelham.

“We are excited about bringing the ITU Cross Tri World Championships to the U.S.,” said XTERRA managing director Dave Nicholas, who served as the Team USA Manager at the ITU Championships in Spain last year.

“By combining the XTERRA series with ITU we are reaching new heights in cooperation between directors and the federations, and the venue at Oak Mountain and Shelby County are perfect for this event.”

Oak Mountain State Park was honored as one of America’s best trail destinations in the Spring 2011 edition of Runner’s World Magazine, where the twisting, rolling trails made the “Crown Jewels – 25 best trail runs in America” list. BUMP, the local trails advocacy group, has spent more than 100,000 hours in design and construction of new trails over the past 20 years.

“Outdoor sports enthusiasts from around the world have discovered that Shelby County’s Oak Mountain State Park provides unparalleled resources,” said Alex Dudchock, Shelby County Manager. “Our collaborations with the State of Alabama, City of Pelham, City of Hoover, Birmingham Urban Mountain Pedalers and other organizations have made extensive improvements possible to the already top-rated course, creating a destination for the serious competitor or for those discovering the thrills of outdoor sports.”

XTERRA competitors have been praising the trails at Oak Mountain since the first XTERRA staged there in 2006.  Shonny Vanlandingham, the 2010 XTERRA World Champion, said, “I’ve raced all over the world, and I just love coming back to Oak Mountain every year.  It is perhaps the best course in the nation.”

“We are pleased to create this regional cooperation and look forward to welcoming athletes from around the world to compete in this prestigious event,” said Hoover Mayor Gary Ivey.

The unique format for the 2012 ITU Cross Triathlon World Championships also provides a spectator friendly competition for the men’s and women’s pro-only races featuring multiple loops on the bike and run courses that will pass through the main athlete village and around scenic Double Oak Lake.  The under-23, junior, age-group and paratriathlon race courses will be staged on more traditional single-loop short and long courses to allow for the larger fields.