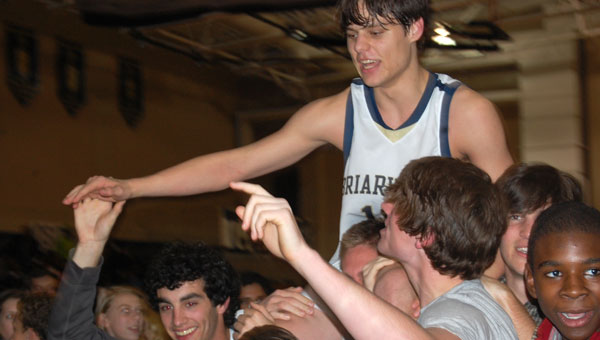 Laatsch wasn’t comfortable being in the spotlight, with all eyes inside the gymnasium fixated on him after his school record 1,399th career point sealed the Briarwood Christian victory in the final minute of the game.

The 6-foot-3 guard would have preferred to see the rest of his teammates head and shoulders above the crowd, as well.

“It was definitely awesome,” Laatsch said, “but I didn’t deserve it. It was a whole team effort. I think the entire team deserved to be carried off the floor.”

Laatsch knocked down a pair of free throws with 59 seconds remaining in the contest, which gave the Lions (14-14) the lead for good. Laatsch finished with 14 points in the victory, which gives him 1,400 career points — two more than previous record holder Charles Hoke.

“I just wanted to be the best I could be,” Laatsch said. “I’m just glad to see the fruit show from my labor.”

Tyler Williams and Dontravious Moon led Vincent (21-6) with 12 points each.

Laatsch scored the game’s first five points and had eight at halftime following a 3-pointer late in the second quarter. The University of West Florida signee didn’t score in the third quarter before scoring six points in the final period.

“I didn’t want the focus to be on him chasing the scoring record,” Laatsch said. “When he hit a lull there, he put the game ahead of him as an individual. I’m proud of him.”