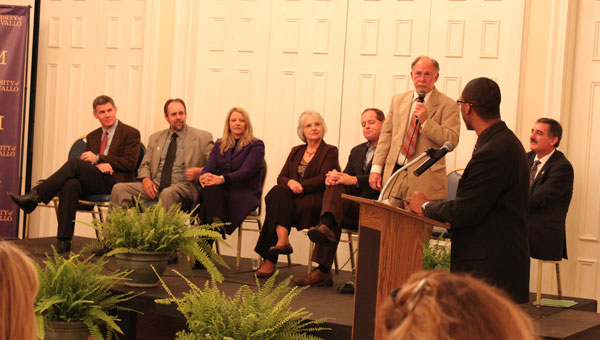 MONTEVALLO – A panel of state legislators addressed questions from students and attendees alike during the Alabama Legislators Higher Education Forum at the University of Montevallo Feb. 2.

“We work hard every day so regular people can send their kids here,” Stewart said, “and when I say regular, I don’t mean Donald Trump.”

The first question of the night addressed a proposal to combine the state’s education trust fund and the general fund.

“If you ever merged the two budgets, Medicaid and prison allocation would eat education alive,” said state Sen. Cam Ward said. “They are an enormous problem in our state. We need to fix it. This is the year to make changes.

“I don’t think it’s a serious proposal,” he added.

Gordon Stone, executive director of the Higher Education Partnership, said the partnership between the higher education institutions and the state legislators is key, and he encouraged attendees to be in contact with their representatives in regards to educational issues.

The legislators then addressed how to keep Alabama college graduates in the state after graduation.

The other legislators agreed with Weaver.

“The best thing we can do for higher education is create jobs,” said State Rep. Kurt Wallace, R-Maplesville.

State Rep. Mary Sue McClurkin, R-Indian Springs, said the higher education budget is supposed to make up 30 to 33 percent of the state’s education budget, but comprises only about 27 percent due to budgetary needs in the K-12 sector.

“We’re on the fast track for job bills to encourage employers to expand their businesses,” said state Rep. Jim McClendon, R-Springville. “This legislature is the most business-focused we’ve seen in over 100 years.”