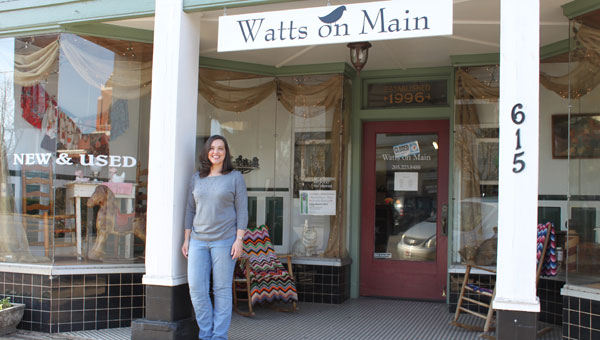 MONTEVALLO – After owning a building in downtown Montevallo for 10 years, the Watts have decided to occupy the space and try their hand at the antique business.

Greg Watts became familiar with Montevallo when he served as the city’s mailman. When he heard the building at 615 Main Street was to be auctioned off, he made an offer. Recently, the building was between renters, so Greg Watts and his wife, Lara, decided to start Watts on Main.

The antique store opened on Oct. 14, 2011. Lara Watts, who was a stay-at-home mom with the couple’s four children, took on the business, as their youngest child is in second grade.

“We wanted to put something in here, and it evolved into this,” Lara Watts said.

Watts majored in graphic design at the University of Montevallo, and now finds ways to use her artistic abilities in her store. She paints furniture the couple purchases at estate sales, auctions and garage sales. Watts gives the furniture a “distressed” look with chalk paint, and her works-in-progress can be seen drying in the rear of her store.

Another iconic item of Watts on Main are the “redneck wine glasses” Watts created out of mason jars and glass candlesticks.

“I never stopped at garage sales before,” Watts said. “You never know what you’re going to see at a garage sale.

“I’m always looking for furniture to refinish,” she added. “Even if it’s broken down and ready for the trash, I know I can fix it and make it look good.”

Some of the gems in Watts on Main include original stadium seats from the Strand Theater, Montevallo’s original movie theater, and an original scale from the drug store, which is not for sale.

Watts said she tries to keep an eye out for particular items requested by customers.

“If people come in looking for something, I’ll write it down. The next time we’re at an auction, we’ll keep an eye out for them,” she said. “We can be a little personal that way.”

State Rep. Jim McClendon gives his opinion on higher-education issues during a forum at the University of Montevallo Feb. 2.... read more