Federated clubs Have a Heart for the Arts 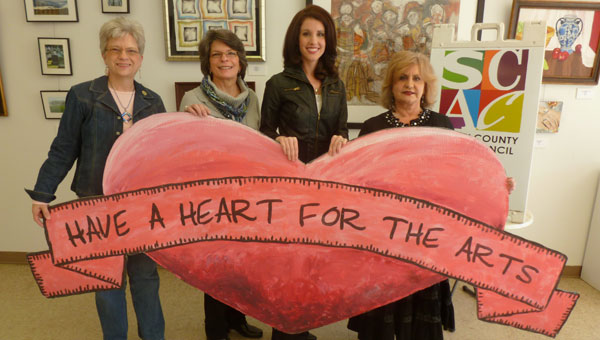 The Fifth Annual Have a Heart for the Arts Luncheon and Fashion Show is Saturday, Feb. 11, at 11 a.m. at the First Baptist Church of Columbiana.

The benefit luncheon is sponsored by the Alabama Federated Women’s Clubs of Columbiana to support the Shelby County Arts Council.

The three clubs are invaluable assets to Shelby County and comprise approximately 75 women. The Columbiana Culture Club led by President Linda Cundiff is the oldest club, more than 100 years old. The Vignette Club, led by President Tresa House, was organized in 1949. Jo Ann Holcombe is President of the Novella Club of Columbiana, which is more than 50 years old. For more than 100 years, the clubs have supported scholarships for students, schools, libraries, abused women and children, nursing homes and more. The Vignettes sponsor the Miss Shelby County Pageant and the Novellas sponsor the Cancer Survivor Dinner the Antique and Arts and Craft Shows. Both Culture and Novella have club cookbooks. Through these projects, the clubwomen donate thousands of dollars and volunteer hundreds of hours to make our community a better place.

The 2012 Heart Lunch emcee is former Miss Shelby County Haley Spates Mims. Mims graduated from Chelsea High School where she was the drum major. She was also Miss Samford, Mrs. Alabama, Top 5 finalist in Miss Alabama and Top 15 in Mrs. Alabama. Mims will entertain at the luncheon singing her signature patriotic medley which has won many talent competitions.

Vignette Nancy Drakos and her Fish Market restaurants (Hoover and Greystone) will prepare the food with desserts homemade by clubwomen. The luncheon will be served by Shelby County middle and high school students.