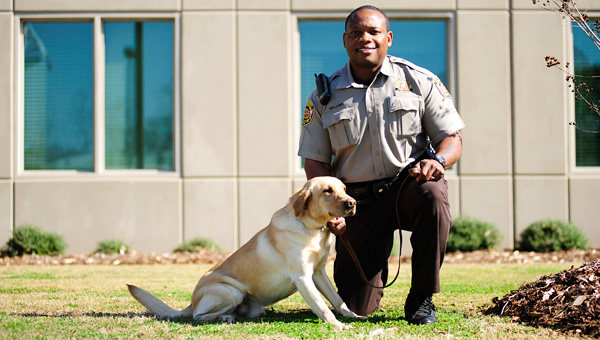 COLUMBIANA – Deputy Rufus Williams has been a member of the K-9 Unit at the Shelby County Sheriff’s Office for one year and three months. Williams’ canine partner, Ammo, began his testing and early training at six weeks old.

Williams spent six weeks in training to learn German commands to instruct his soon-to-be canine partner, and the duo spent time creating a strong bond. The pair was matched up based on compatibility of their personalities and have been partners ever since.

Williams wakes around 5 a.m. every day to workout while Ammo sleeps in for a bit longer.

“I train with him every day, one to three hours a day. You have to be in good physical condition and so does the canine,” Williams said.

Ammo, who is now two years and three months old, is socialized with other dogs and people.

For training, Williams will put a “hide,” a small amount of narcotics that deputies use for training exercises, in his yard or in one of his personal vehicles to help Ammo sharpen his detection skills.

According to Williams, Ammo can find the hide in three to five minutes depending on the wind direction, humidity and placement. Each time Ammo successfully detects narcotics he is rewarded with his favorite toy.

Williams provided a demonstration of a narcotics search on his own vehicle. Ammo was able to detect hidden narcotics in nearly two minutes.

“He is always focused on the job,” Williams said as Ammo sat patiently signaling to Williams and waiting for is reward for a job well done.

“Once he finds the scent cone, he can find the source,” he said.

A scent cone is the path that a scent is wafted according to wind direction and numerous other factors.

Williams is always mindful of both his safety and the safety of his four-legged partner, taking every precaution when working in confined spaces or in heavy traffic areas.

“I always try to go against the flow of traffic so I can see, and (Ammo) is always close on the lead,” he said. “I try to be proactive and initiate stops, and other agencies will utilize our canines as well.”

According to Williams, when dogs are considered for the training program they are tested for 18 different characteristics. There are four main characteristics that canines have to meet, known as H.A.R.P., which stands for hunt, air scent, retrieve and prey.

One of the most important things for Williams to have in a canine partner is the ability to be social.

“The most important thing for me, aside from H.A.R.P., was him bonding with my family,” Williams said. “He’s just a well-rounded, very obedient dog.”

Ammo is not just a nine-to-five work partner. He goes home with Williams at the end of the workday as well.

“If I let him out he’ll play and just be a dog, but once I give him a command, he’s immediately working,” Williams said. “You have to have that bond between handler and canine.”

Williams said that his 8-year-old son, Nicholas Williams, gets along really well with Ammo.

“(Nicholas) will try to give him commands in German that he has learned from watching me,” he said.

Williams is a first generation sheriff’s deputy in his family, and he said he believes that his son may be the second generation.

“He wants to be a canine handler one day himself,” Williams said with a smile.

Sidewalks could be coming to Bearden Road