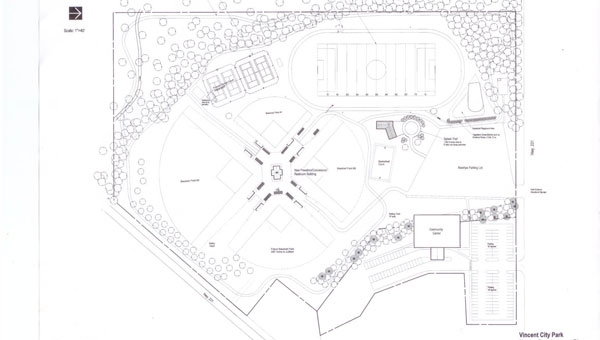 The town of Vincent has completed a proposal master plan to give the Vincent Municipal park a facelift. (Contributed)

VINCENT – The town of Vincent has proposed a master plan to refurbish the Vincent Municipal Park on Shelby County 62 and U.S. 231.

The most recent changes include a new sign that was redesigned and placed at the front of the park. Knockout roses have been planted around the children’s play area, trees have been cut back and some cosmetic landscaping has been completed.

According to Mayor Ray McAllister, many significant changes will be made over the next five years and beyond. There is space for an additional baseball field and four tennis courts to be added at the location. According to McAllister, the town owns an additional three acres on the opposite side of the existing parking lot.

The proposed master plan includes the additional baseball field and tennis courts, modifications to the existing football field to make it functional for soccer games, new concession stands and press box, as well as a community center that will also function as a tornado shelter for citizens.

“We will go after federal grants for the storm shelter,” McAllister said.

The town will also add a splash pad to be enjoyed during the summer months. A walking and jogging trail will surround the entire complex and expanded parking areas will provide 94 new spaces.

“We’re looking at five to 10 years. We’d love to be able to do it in five years, but we don’t know,” said McAllister. “We’ve been working on the plans for the park for over a year now.”

McAllister also said that the town is interested in purchasing standard outdoor workout equipment for the complex as well.

“We have a great recreation board, everyone’s working hard and working together.” McAllister said. “It’s really good.”