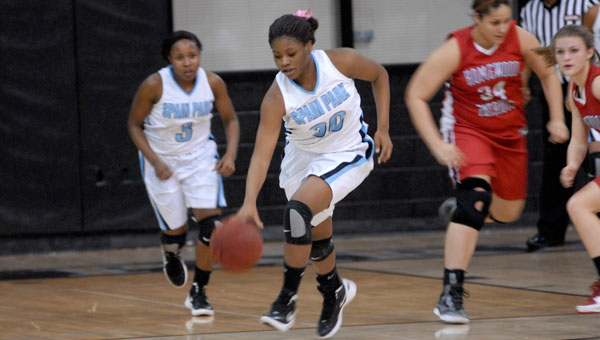 HOOVER — The Spain Park High School girls’ basketball team will have more than an Alabama High School Athletic Association Class 6A, Area 12 tournament championship on the line Monday night following a 62-47 win over Homewood in the tournament semifinals Feb. 9.

The Jaguars will meet Mountain Brook in the title game Feb. 13 at 6 p.m. with the right to host a sub-region playoff contest riding on the outcome. With the Class 6A, Area 12 runner-up likely traveling to face a loaded Hoover squad on its homecourt, Spain Park coach Mike Chase said his team faces a must-win situation against the Spartans to make a postseason run.

“It puts a lot of pressure on the championship game,” said Chase, whose Jags split a pair of regular-season meetings against Mountain Brook. “It’s likely an elimination game. It should be fun.”

Jessica Freeman led Spain Park (20-11) with 14 points in the victory over Homewood.

Ashley Gaston and Jasmine Hollis added 13 points each. Hollis finished with a double-double after registering 11 rebounds.

Whitney Gulledge contributed seven points and dished out a team-high five assists. Victoria Baldwin chipped in six points and a team-high 14 rebounds in the win.

Takia Mickens and Kelsie Williams added one point and three rebounds each. Denise Newton grabbed two rebounds, dished out two assists and finished with two steals in the win.

The Jaguars raced out to a 24-5 lead following the first quarter and held a 40-14 advantage at halftime after leading by as many as 28 points in the opening half.