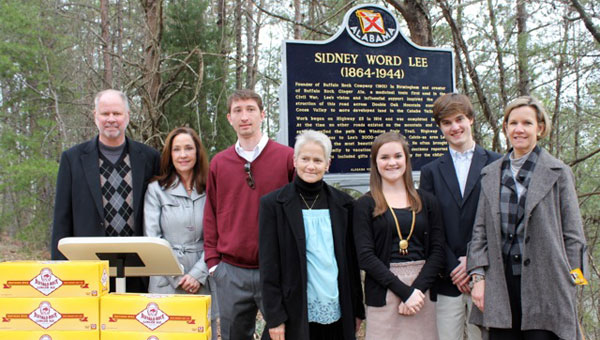 The marker is located on Alabama 25 between Leeds and Vincent between mile marker 162 and 163 overlooking Dunnavant Valley.

According to Bobby Joe Seales, president of the Shelby County Historical Society, the original marker was severely damaged after a car struck it.

Mary Roensch, a landowner in Sterrett, brought the damaged sign to Seales’ attention and began researching.

“I’ve been looking at the sign for over 20 years wondering who that was, turns out it was Sidney Lee,” she said.

According to a Shelby County Historical Society newsletter, Lee and Erskine Ramsay traveled to the Ramsay-Lee Lodge, also known as the Montpelier Club, on Kelly Creek frequently.

Bryant Justice grew up in Calcis and remembers Sidney Lee giving treats to the children in the area. He shared his fond memories at the ceremony.

“Each Friday, the two men would stop to give children peppermint canes and fruit on their way to the camp,” Justice said.

According to Shelby County records and archives, Lee’s influence initiated the construction of Alabama 25 across Double Oak Mountain connecting Coosa Valley and Cahaba Valley. This was the first road that existed on the mountain and provided accessibility for residents in need of healthcare, provided business development to the area and a direct route to Birmingham as well as a path to Lee’s camp in Calcis. Lee referred to the area as one of the most beautiful places in the world and vacationed there often.

McAllister commended the Lee family for their work in Shelby County.

“We look at the Lee family today, I’ve done business with the Lee family. They are a people company; they take care of their people, and that’s something Sidney Lee would be proud of,” McAllister said.

The posting of the colors and pledge of allegiance was conducted by the Vincent High School JROTC.

“The Alabama Historical Association historic markers are of places and people that have had a meaningful purpose in the influence of Shelby County and Alabama,” Seales said.

James C. Lee III and Peyton Lee, the great-grandchildren of Sidney Lee Word, provided a brief history of their descendant and his influence on the county.

“Sidney Word Lee is someone I’ll never have the opportunity to meet, and to get to know him like this is really great,” Peyton Lee said. “They loved this part of the world. It’s such an honor to have this historic marker.”

“I’m sure that Sidney, my grandfather and my father are looking down thinking, ‘Wow, it finally got to be historic,'” she added.

Caroline Lee and Cameron Lee, both descendants of Sidney Word Lee, said the experience is not one they will soon forget and find it “awesome” that their great-great-grandfather influenced the construction of Alabama 25.

“My great-grandfather was a man of vision loved the people loved the area,”  James C. Lee III said. “He helped get the road built, it took about seven years.”