Member of Ellis family passes away 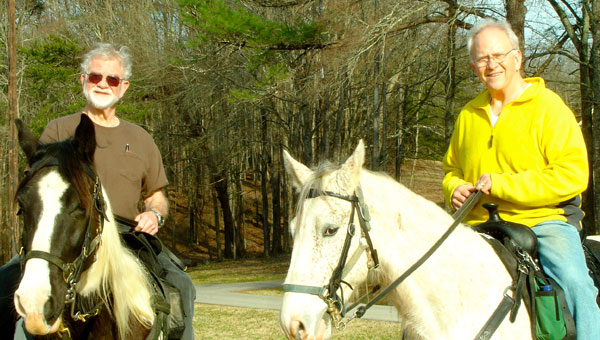 Handy Ellis, left, and brother Butch Ellis grew up on a family farm in Columbiana. (Contributed)

COLUMBIANA – A member of the deep-rooted Columbiana Ellis family passed away on Feb. 9.

Leven Handy Ellis II was the older brother of county attorney Frank C. “Butch” Ellis Jr. by only 14 months. Butch Ellis is only about a year older than their sister, Linda Blanton. The siblings were “born and reared right here in Columbiana,” Butch Ellis said.

“We were inseparable coming up. We lived on a working farm,” Butch Ellis said of his brother. “We were up seven days a week, 365 days a year at 3 o’clock in the morning milking cows, and we were back in our boots at 3:15 after school to work. We worked together side by side.”

“He covered a lot of territory and ground,” Butch Ellis said with a laugh.

“He was a wonderful, gentle person with a very positive spirit,” sister Linda Blanton said. “Not a complainer at all, never complained about things. He reminds me so much of our mother in that respect.”

Handy Ellis and his wife, Patsy Self Ellis, lived in Jefferson County until about five years ago when the couple moved back to the family farm in Columbiana, which has been in the family for more than 100 years, Butch Ellis said.

“He was active in his church. We’ve always been Methodist, and he’s a member of the Methodist church here, but up there (Jefferson County) he was a member of Rose Hill Baptist Church,” Butch Ellis said. “He served for several years until a few years ago as a monitor on a school bus for disadvantaged, handicapped children. His wife drove another school bus.

“(After returning to Columbiana), he was renewing old acquaintances, sharing life with family and friends,” he added.

Visitation for Handy Ellis will be from 2-3 p.m. on Feb. 11 Columbiana United Methodist Church. Funeral services will be at 3 p.m. Feb. 11 at the church. Burial will follow at the Ellis family cemetery.

“Uncle Handy was a kind, gentle and loving soul who will of course be sorely, sorely missed,” said nephew Corley Ellis, chairman of the Shelby County commission. “He was a big part of our family and will be truly missed.”

Black History Month event to be held at UM Feb. 23

FROM STAFF REPORTS MONTEVALLO – Members of the Montevallo Branch of AAUW have announced plans for a special Black History... read more