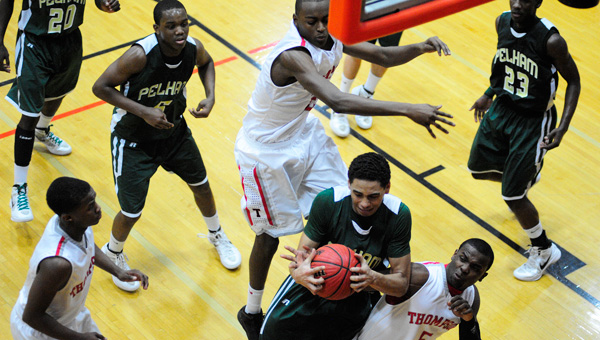 HOOVER — Pelham High School senior Trey Hurst made the most of his final battle against rival Thompson in his high school basketball career Feb. 10.

After missing the Panthers’ home-and-away meetings in the regular season with the Warriors during Alabama High School Athletic Association Class 6A, Area 10 action, Hurst got one last shot to suit up with his teammates against Thompson in the area tournament semifinals at Hoover High School.

Hurst beat his defender off the dribble and drove down the lane for a basket with 52 seconds remaining, which gave Pelham a lead it wouldn’t relinquish in a 43-41 win over the Warriors.

“This game meant so much to us,” Hurst said. “We weren’t going to let this be our last game. I’m just speechless.”

For the second year in a row, the Panthers upset their biggest rival in the AHSAA Class 6A, Area 10 tournament semifinals. The victory earned Pelham a spot in the Class 6A playoffs and ended the Warriors’ season.

“This is why you play the game,” said Pelham coach Joel Floyd, “to experience situations like this.”

Pelham will face host Hoover in the AHSAA Class 6A, Area 10 championship game Feb. 13 at 7 p.m.

Qadash Williams led the Panthers (16-11) with 10 points in the victory over Thompson.

The Warriors jumped out to an early 9-4 lead at the end of the opening quarter following a 3-pointer by Lewis with 29 seconds left in the first period.

Thompson pushed its lead to 11-4 following a layup by Jaalen Jones with 6:26 remaining in the second quarter, but the Panthers responded with a 6-0 run to cut the deficit to one point. Williams’ layup with 4:09 left in the first half cut the Thompson lead to 11-10.

Pelham took its first lead in the game following a jumper by Meadows with 1:34 left in the second quarter, which put the Panthers on top 16-15. However, the Warriors ended the first half with a 4-0 run, capped with a pair of free throws by Gamble with eight seconds left in the second quarter, to carry a 20-16 lead into the locker room at halftime.

The two teams traded baskets down the stretch in the fourth quarter. Nabors tipped in an offensive rebound with 1:16 left in the game to put the Warriors on top 41-40 before Hurst’s game-clinching basket.

“Trey is one of those guys that is kind of shifty,” Floyd said. “He really made a play.”

Hurst added a free throw with 22 seconds remaining to give Pelham a two-point lead.

Lacey blocked a shot by Nabors with 12 seconds remaining, and Nabors’ layup attempt and an ensuing putback opportunity by Gamble bounced off the rim in the final seconds to clinch the Panthers’ victory.

“Xavier was huge in crunch time on defense,” Floyd said.