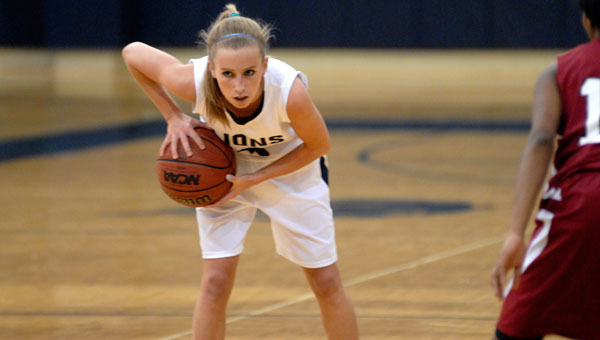 Briarwood Christian had trouble converting many open looks from the field, which led to several transition opportunities for Thomas in her 41-point performance in Aggies’ 64-45 victory over the Lions in the title game.

“She’s a great player,” Brown said. “We just didn’t hit enough shots. Every missed shot became a rebound for her and she was off to the races.”

Sylacauga ended the fourth quarter with a 15-2 run, which distorted the final score in a game that remained close throughout the contest.

Medders’ hook shot just 1:09 into the game tied the score at 2-2 before the Aggies led the remainder of the contest. However, Briarwood Christian kept the deficit within single digits until late in the fourth quarter.

However, the Aggies closed the opening quarter with a 4-0 run to push their lead to 14-7 following the first quarter.

The Aggies stretched their lead to as many as eight points late in the first half before Cutcliffe knocked down a 3-pointer with 36 seconds left in the second quarter, which cut the Lions’ deficit to 25-20 entering the locker room at halftime.

Cutcliffe’s floater in the lane capped a 7-2 run by Briarwood Christian to start the second half and temporarily tied the game at 27-27 with 5:00 remaining in the third quarter.

Sylacauga stretched its lead to 35-27 following an 8-0 run, which was capped with a layup by Thomas with 3:01 left in the third quarter.

Cutcliffe’s 3-pointer in the first minute of the fourth quarter trimmed the deficit to three points, 38-35, before Sylacauga went on a 9-2 run to end the Lions’ hopes of comeback win.

Brown said the Aggies’ fourth-quarter run was too much for his team to overcome.

“It seemed like forever before we hit another shot,” Brown said. “You have to give (Sylacauga) credit for that.”