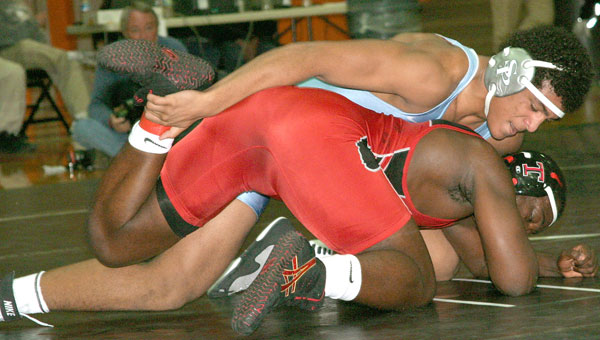 HOOVER — The Thompson High School wrestling team missed out on one title on its path toward its first Alabama High School Athletic Association Class 6A state championship a year ago.

The Warriors rightfully claimed their status as the top wrestling team in the state, but Thompson missed out on a chance to seal a Class 6A section championship after finishing runner-up to mat rival Hoover.

Thompson took revenge in a dominating manner Feb. 11 on the Buccaneer’s home mat, with a program-record eight individual section champions and state-record tying 14 individual state qualifiers on its way to a Class 6A section title at Hoover High School.

The Warriors claimed the Class 6A team championship with 13 state qualifiers last season. Thompson coach Shawn Weltzin said having a full stable of wrestlers competing in each weight division will help the Warriors in their quest for a repeat. The AHSAA state wrestling tournament will be held Feb. 16-18 at the Von Braun Center in Huntsville.

“It gives us a better chance in the long run,” Weltzin said. “It puts us in a better position.”

The Warriors finished with 239 team points in the Class 6A section meet, which put them more than 30 points ahead of second-place finisher Vestavia Hills. Thompson finished more than 80 points ahead of Hoover, which came in third place in team standings.

“(Rayam) is a tremendous athlete and competitor,” Weltzin said. “He just got the job done today.”

The Jaguars’ Tommy Bostany captured the 120-pound championship. Bostany earned a 10-1 major decision over Richard Graham of Hoover in the 120-pound title match.

Pelham saw three wrestlers qualify for the state tournament at the Class 6A section meet.

The Panthers’ Cody Wehunt came in third in the 160-pound division.

Pelham High School forward Qadash Williams drives to the basket in the Panthers' 43-41 win over rival Thompson in an... read more